If the ambient air is very dry, plants need to protect themselves against excessive loss of water. For this purpose, they close special pores in their leaves. University of Würzburg researchers have explored how plants sense changes in humidity and translate this information into a signal. 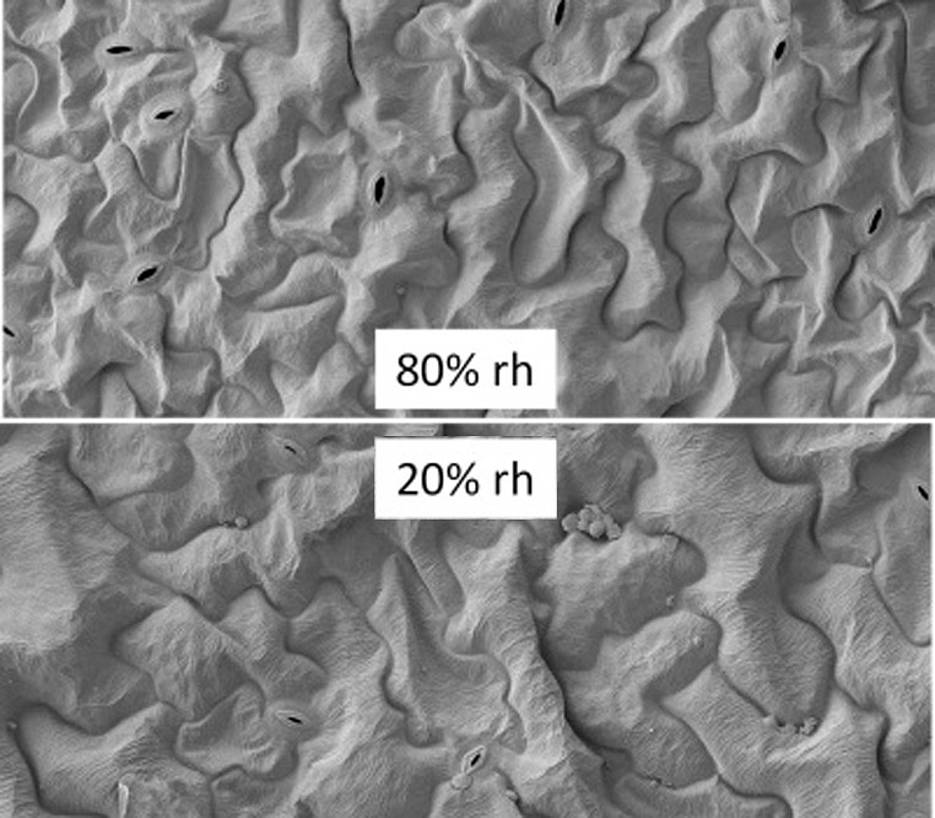 Plants exchange gases, such as carbon dioxide and oxygen, with the atmosphere via special openings in their leaves, known as stomata. A ring-shaped arrangement of two so-called guard cells works like a swim ring: When the cells are swollen, they form an open ring; when the internal pressure drops, they shrink and the pore closes again.

In low humidity conditions, when there is a shortage of water, plants always face the following dilemma: Of course, they need to open their stomata as wide as possible in order to obtain carbon dioxide for photosynthesis, but at the same time they should close their stomata in order to prevent the risk of losing too much water in the form of water vapor.

As a matter of fact, plants possess various partly overlapping mechanisms for ordering the stomata to open or close. The search for an ideal compromise under the respective conditions is subject to precise control. Professor Rainer Hedrich and his colleague, Dr. Peter Ache at the Department for Molecular Plant Physiology and Biophysics of the University of Würzburg, have gained new insight into this finely adjusted regulatory system and published their research in the journal Molecular Plant. The researchers used the well-understood genetic model organism Arabidopsis, also known as thale cress, in order to explore how the plants sense changes in humidity and translate this information into a chemical signal.

In a study published last November, Hedrich and Ache had already shown that guard cells can respond directly and independently to low humidity by producing the stress hormone abscisic acid (ABA). "ABA induces the guard cells to release salts from the cell inside. As a consequence, water flows outward and the guard cells shrink, which leads to stomatal closure," Rainer Hedrich explains.

The two Würzburg researchers have now examined plants in which this signaling pathway is compromised due to mutation. "We worked with plants with a defect in an important switch gene," says Peter Ache. When compared with wild type plants, the activities of 100 genes were affected in each case by these mutations.

The researchers investigated which of these genes were preferentially expressed in guard cells and which of them responded to both the abscission hormone ABA and to dry air. They finally narrowed down the genes fulfilling all these criteria in both mutants to a total of four. "We consider these genes extremely important for stomatal response to reduced humidity," says Peter Ache.

The role of sugar molecules

One of these genes is also of crucial importance in the sugar metabolism of the guard cells. "It has long been our assumption that sugar plays an important role in stomatal closure due to dry air," Rainer Hedrich points out. Two scenarios are conceivable, which are not necessarily mutually exclusive:

"Firstly, the cell wall is amply equipped with sugar molecules, which attract water molecules. If this water is withdrawn due to dry air, the solubility of the cell wall sugars changes. This signal can be directly transmitted into the cell. Secondly, dry air may trigger the quick release of osmotically active sugars from the guard cells, leading to the release of water and to stomatal closure," the scientist explains.

The Würzburg plant biologists are going to tackle the open questions about the role of sugar in the dry air response mechanism by means of mutants with alterations in guard cell sugar metabolism and transport.

In their current study, for instance, Hedrich and Ache have already examined mutants in which the function of the sucrose synthase gen SUS3 is compromised. In their experiment, they investigated whether the genetic defect affects the ABA effect in low humidity conditions. This is in fact the case.

A new detail in a complex network

"The fact that some of the genes in the respective mutants are still activated, but others are not, supports our hypothesis that the respective proteins must be centrally involved in the humidity signaling pathway and that sugars play an important role in the process. Thus, we have made some headway in clarifying the whole network and identifying the possible humidity sensing mechanism," Peter Ache says with satisfaction.

Within the Bavarian research association ForPlanta, "Plants fit for the future", Hedrich and his colleagues have already used some other stimuli to induce stomatal closure and to analyze the respective changes in gene activity. They now intend to decipher the whole network with the help of bioinformatics. As to his future plans, Hedrich says: "When we have developed an understanding of stomatal closure due to dry air, we shall lock at the opposite stomatal response, namely the regulation of stomatal aperture".