The tiniest fragments of bacteria are enough to trigger a defense response from plants to parasites. Researchers from the universities of Würzburg and Basel are now able to describe the molecular details of this response. 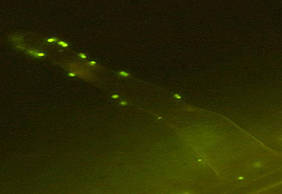 In the wild, the life of a plant is constantly in jeopardy: unfavorable environmental conditions, such as prolonged drought or pollutants in the atmosphere, soil, and water are a threat. And lurking nearby, always ready to attack, are fungi, bacteria, and viruses.

If these pathogens were left to their own devices, the flora would no longer be so lush, green and magnificent. Plants must therefore have a way of holding their little enemies at bay. How do they do this, incapable as they are of simply running away or grabbing a first-aid kit?

Teams from the universities of Basel and Würzburg have come up with answers to this question. Professor Thomas Boller from Basel and the Würzburg team led by biophysicist Professor Rainer Hedrich and molecular biologist Dr. Dirk Becker have published their findings in the renowned journals The Plant Journal and Journal of Biological Chemistry.

In these journals, the researchers show how plants put potential pathogens in their place using their innate immune system. They researched this phenomenon using bacteria of the genus Pseudomonas and the model plant Arabidopsis thaliana. Pseudomonas bacteria can cause rot in plants, among other harmful effects.

The choice of the Pseudomonas bacterium was far from random – Thomas Boller’s team had already previously achieved a decisive breakthrough: the Basel scientists had identified a receptor (FLS2) in the membrane of plant cells. This detects fragments of bacterial organs of locomotion, so-called flagella, even in miniscule quantities.

“We were at a conference when we agreed to bundle our expertise in biophysics (Würzburg) and biochemistry (Basel),” reports Rainer Hedrich. The researchers’ goal: to shed light on the early processes that plants use to detect pathogens.

The Würzburg scientists received from Basel a peptide chain of 22 amino acids in length (Flg22) consisting of the flagella building block flagellin along with receptor mutants of Arabidopsis. With this material, they managed to establish that the bacterial peptide excites plant cells electrically: roughly one minute after administering the bacterial fragment to the plants they noticed a rise in the concentration of calcium together with a ten-minute depolarization of the membrane. “Using calcium, the flagellin receptor activates an anion channel in the membrane,” says Dirk Becker.

At the same time, the Basel researchers demonstrated that the excitation of the membrane is communicated to the cell nucleus and stimulates the immune system: the plant activates defense genes, assembles antimicrobial substances and enzymes, and with these overwhelms the bacterial intruders.

To prevent the microbes from spreading, whole groups of cells surround the source of the infection and sacrifice themselves as a kind of last resort. Brown patches and microscopically small “scars” remain as witnesses to the successful defense against the pathogens.

But what if the plant overlooks the flagellin, which is found in many bacteria? That’s no major problem! “The plant identifies intruders using a variety of receptors simultaneously – it takes a typical fingerprint of the respective pathogens,” says Thomas Boller.

The innate immune system of plants consists of hundreds of such early warning systems. These include those of the PEPR1/2 type, which detect endogenous peptides from inside the cell. As soon as microbes damage a plant cell, these peptides reach the surface receptors of surrounding cells and signal the danger.

Based on their research, the German/Swiss research alliance has drawn the following conclusion: the different danger signals detected by these receptors are translated into an electrical signal via the same anion channel.

Hedrich: “We are currently working on tracking down the gene for this central ion channel. We have found two gene families that encode anion channels. The task now is to nail the prime suspect.” 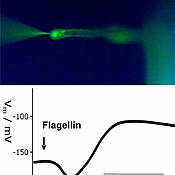