The coelacanth is interesting in many respects: until 1938, this fish was thought to have become extinct; it has changed very little in the past 300 million years; and it is considered a predecessor of the first land creatures. Now scientists have decoded its genome. 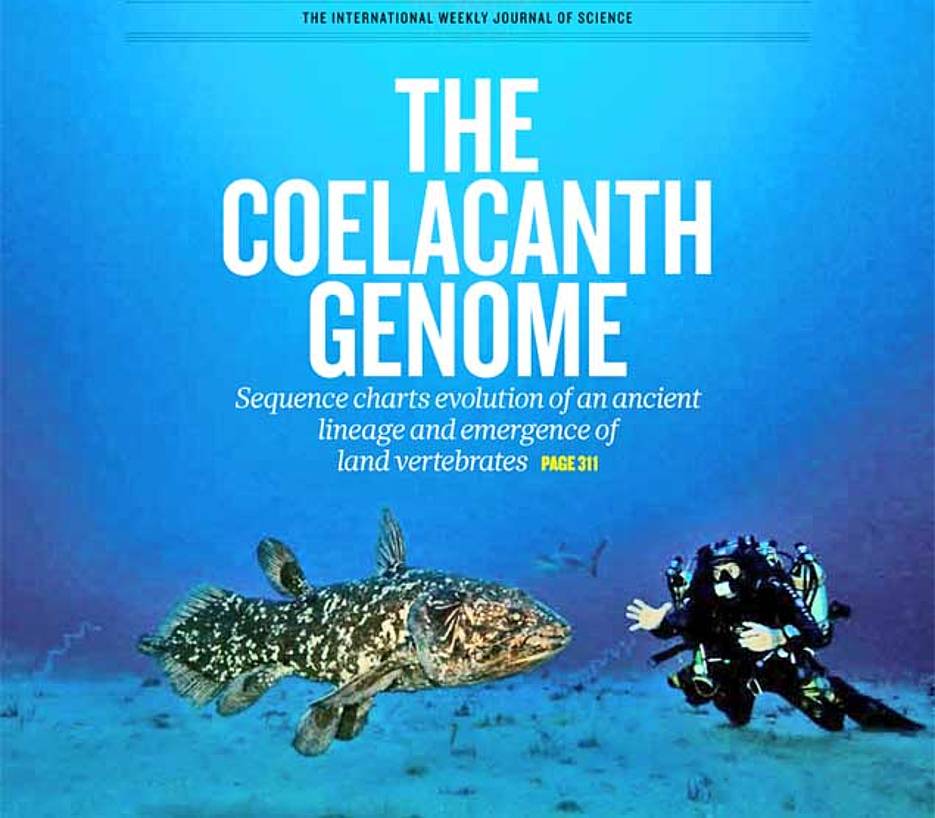 If scientists had to bet on which species of fish still alive today is the closest relative of the fish that first left the water and crawled onto land some 400 million years ago, there would be two hot candidates: the coelacanth and the lungfish. A decision between the two has now been made. A global network of scientists has decoded the genome of the coelacanth; their findings reveal that the lungfish is slightly more closely related to the first land creatures. Nevertheless, the coelacanth remains the preferred research subject for the science world.

“The coelacanth is right at the interface of evolution between fish and terrestrial vertebrates. So, from an evolutionary perspective, this organism is of huge interest,” says Professor Manfred Schartl, Chairman of the Department of Physiological Chemistry at the University of Würzburg’s Biocenter. This biochemist and geneticist was involved in the work to decode the genome of the coelacanth. This project is the main feature of the current issue of Nature.

For two years, researchers worldwide sequenced the coelacanth genome, identified the genes, and compared them with the genetic material of both the lungfish and various animals that live on land. What they were most interested in was establishing which genes were lost or gained when fish evolved into land dwellers, and which new regulatory elements – segments of genetic material that control where, when, and to what degree genes are active – were added. Their main discoveries are set out below.

The relocation from water to land brought many changes in the genes that control olfactory perception – specifically those that allow their hosts to identify odors carried through the air. This was a logical development since the first land creatures obviously needed new ways of detecting substances in their environment.

When comparing the coelacanth genome with that of land creatures, the scientists came across a large number of changes in the regulatory segments and genes that control the immune system. They concluded that these might be the response to new pathogens that the first land dwellers faced.

The research team happened upon several key regions in the genome where evolution had been at work to generate the changes typical of terrestrial vertebrates, such as limbs, toes, and the mammalian placenta. One of these regions, known by the name HoxD, contains a specific sequence that can be found in both coelacanths and terrestrial vertebrates. It is highly likely that this was adopted by land creatures to form arms and legs.

Manfred Schartl’s primary interest was in the changes to the nitrogen cycle with the transition from water to land. “In water, it is easy to get rid of nitrogen as a metabolic end product,” says the biochemist. Fish could excrete it into the water through gills in the form of ammonia. Terrestrial creatures, on the other hand, had to develop a different technique: they convert ammonia into less toxic urea and excrete this via the kidneys.

Schartl’s studies show that the most important gene involved in this urea cycle is present in land vertebrates in a modified form. As he was able to prove, this key gene had mutated even before fish came ashore. “The animals had therefore already adapted to the conditions on land before they ever even lived there,” says Schartl. This development is similar to that which occurred with pulmonary respiration, for example, or the transition from fins to limbs reinforced with bone and muscle.

Coelacanths have been extinct for approximately 70 million years: this conviction was considered fact among scientists for a long time. That was until 23 December 1938, when fishermen off the coast of South Africa discovered in their nets a steel-blue fish roughly 1.50 meters long and weighing 52 kilograms: the first specimen of a coelacanth alive today. A further 14 years would pass before, in 1952, in the area between the Comoros Islands and Madagascar, 3000 kilometers away from the first discovery site, a second coelacanth was caught. Since then, a little over 300 individuals have been detected.

Today’s coelacanths strongly resemble the fossilized impressions of their old ancestors from more than 300 million years ago. Their genome confirms what many scientists had long suspected: the genes of the coelacanth take much longer to mutate than those of other organisms over the course of evolution. “We know that in the coelacanth genome mutations occur far less frequently than in most other organisms,” says Manfred Schartl. The reasons for this can only be speculated on, according to Schartl. “It presumably also has to do with the genes and may be related to the very slow metabolism of the coelacanth,” he says.

Few mutations over long periods of time – from an evolutionary point of view this is not necessarily an advantage. “Such animal species find it hard to adapt to changed living conditions,” says Schartl. For the coelacanth this should not be a problem: it prefers to stay several hundred meters below sea level in deep ocean waters – an environment with very stable conditions.

The importance of the work

The decoding of the coelacanth genome is of huge interest to science, says Schartl. The fish represents the direct ancestor of amphibians, reptiles, later birds, and at some point, of course, mammals; evolution at work can be studied in unique fashion by examining this fish, he explains. Armed with this knowledge, scientists could now turn their attention to the level of proteins, for example, and trace how these emerged over the course of evolution.

There are two reasons why research is not now focusing on the lungfish, even though this is even more closely related to the first “land-walkers” than the coelacanth: firstly, the lungfish has changed considerably more since then than the relatively unmutated coelacanth. For this reason, events that happened 400 million years ago can no longer be tracked using lungfish alive today. Secondly, its genome is many times larger. While the coelacanth genome is composed of about three billion building blocks – as many as the human genome, there are an estimated 100 billion in the lungfish genome. It is not yet technically possible to sequence, group, and analyze all these, says Schartl.

The beginning of further analyses

It is quite possible that the genome of the coelacanth contains other important information for scientists studying the evolution of terrestrial arthropods. “This is just the beginning of many analyses where the coelacanth will be able to tell us something about how fish came ashore and how land vertebrates, including humans, evolved,” says Manfred Schartl. With the help of modern empirical methods, science will now be able to obtain information about key mechanisms that set significant evolutionary progress in motion.