Odors play a major role in the life of honeybees. Accordingly, their nervous system needs to be highly capable of processing olfactory information. Indeed, the animals have the ability to process the relevant data in parallel as researchers of the Biocenter have been able to demonstrate for the first time. 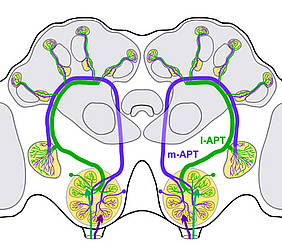 When foraging for nectar- and pollen-rich flowers, honeybees (Apis mellifera) have to respond quickly to sensory input. When their olfactory receptors on the antennae catch traces of a scent in flight, the animals need to determine very quickly which type of scent it is and where it originates from. This is the only way to make the right decision about the flower in question. In other respects too, the bee is highly dependent on the capacity to identify and classify odors in its everyday life: The animals communicate with each other via odors, differentiate between friend and foe on the basis of the typical "hive odor" and rely on odor trails for orientation.

In order to implement fast and reliable processing of such olfactory information, the honeybees have developed special structures and extremely efficient processing methods. The structural design of this olfactory system has long been known in minute detail; previously, however, there was a need for clarification on the flow of information within these structures. This has changed now: Together with colleagues from the Free University of Berlin (FU Berlin), University of Würzburg scientists have found answers to previously unanswered questions.

"We were able to establish that honeybees process olfactory information in parallel in the brain. Different parameters of the same information are transmitted via separate pathways in the animals, which increases the processing speed significantly," says Professor Wolfgang Rößler, the head of the Department for Zoology II at the University of Würzburg. Together with his doctoral student, Martin Brill, he conducted the decisive experiments during the past two years.

Parallel processing: This type of processing is already known by scientists to be used in other sensory systems, such as vision. The information arriving at the retina of the eye is first divided into different components – color, contrast, movement, location – and then transmitted to the brain for further processing via separate channels. Two such channels are known to exist in bees as well, but they are located in the olfactory system in their case. Previously, it was uncertain whether these are actually used for parallel processing. "It would have been just as conceivable that these structures only differ in that they are responsible for different odors," Rößler notes.

The olfactory system of the bee

The honeybee possesses about 60,000 olfactory receptors, located on its two antennae. From there, the information is transferred to the so-called antennal lobe, where primary processing takes place in about 160 spheroidal structures, the olfactory glomeruli. Via two neural tracts, consisting of numerous individual nerve cells, the data are then sent to higher-order structures – the mushroom body and the lateral horn – to be further processed. The Würzburg scientists focused their research on these two neural tracts.

"In earlier studies, the activity could only be measured in one of these neural tracts at a time," Martin Brill explains. Thus, it was impossible to decide whether the information is processed in parallel. Therefore, the scientists first needed to develop an apparatus for taking synchronous measurements in both tracts, the so-called multi-unit recording technology. Special amplifiers were required to read the signals and some special software to control the processes.

It was therefore "quite an effort" to get started on the studies, as Brill remembers. The preliminary work alone stretched over about two years. As soon as the technology was ready, however, the experiments proceeded to the satisfaction of the scientists. They collected a treasure trove of data within a very short period of time. They were assisted in the evaluation of the data by the computational neuroscientist Martin Nawrot (FU Berlin / Bernstein Center for Computational Neuroscience Berlin).

In their experiments, Rößler and Brill presented a diverse range of odors to the bees: from typical floral scents, to pheromones – i.e. messenger substances that the animals use for communication – to social odors from the everyday environment of a honeybee: Beeswax, honey, abandoned combs. During odor exposure, they measured the activity of numerous nerve cells in both neural tracts, using extremely fine probes, namely wire electrodes made by the scientists themselves, corresponding in diameter (15µm) to just one fifth of one strand of human hair.

The results of the studies

"Our studies have shown that both neural tracts exhibit broadly overlapping activity patterns. This indicates that the information is processed in parallel," Wolfgang Rößler summarizes the results. The assumption that the tracts might be responsible for different odor types has thus been refuted.

However, the scientists also found some differences between the tracts: One transmits information in a very general way – each single nerve cell that it is composed of responds to a diverse range of odors. The other one works in a rather more specific way: In this tract, individual nerve cells are responsible for only one odor or just a few odors. On this pathway, the transmission takes a bit longer – albeit only in the millisecond range.

The "what" channel and the "when" channel: This is how the scientists named the two neural pathways. One pathway tells the bee which odor it currently perceives while the other pathway provides the respective temporal information. From this information, the animal can derive with precision where the odor originates.

According to Rößler, the processing principle might be particularly well suited for conducting a very fast analysis of odor mixtures. This is of special importance to the bees, since each bee hive has its own distinctive odor. The smell is caused by an assortment of about 25 substances on the surface area of the bees' body, differing from colony to colony in its special mixing ratio. Whether parallel processing actually enables bees to identify odor mixtures particularly well is still subject to further examination and the respective hypothesis needs to be tested in future, Rößler explains.

In any case, Rößler warns against excessive euphoria: The "olfactory code" has not yet been cracked in our study. However, we have achieved an important step towards this goal.

The project was funded by the German Research Foundation (DFG) under the nationwide priority program "Integrative Analysis of Olfaction" (SPP 1392).