Help for the skin

First the skin blisters. The blisters burst and leave behind sore spots – true gateways for infectious agents. The disease referred to is called pemphigus and can be life-threatening if left untreated. Scientists of the University of Würzburg have made progress in its research.

With pemphigus, the immune system attacks the organism: It attacks a group of proteins that is necessary for the cohesion of skin cells with antibodies. The usually tight cell structure dissolves, cavities that fill with fluids develop in the skin. Thin-walled blisters form out of this.

"The most dangerous thing about this disease is that it destroys the skin's barrier function", says Jens Waschke, Professor for Anatomy. The body threatens to desiccate, furthermore, dangerous bacteria can enter and cause blood poisoning.

The rare disease mostly affects people between 40 and 70: About 80 cases are recorded in Germany per year. The chronic condition is currently being treated with cortisone and other drugs that suppress the immune system. "This, however, leads to sometimes severe side effects that justify the search for new therapies", thinks the professor.

Fighting the dangerous antibodies in the patient's organism: In the Journal of Biological Chemistry, Waschke, his colleague Detlev Drenckhahn and further researchers from Würzburg describe how this could work in principle.

The team was able to significantly reduce the damaging effects of the antibodies in cell cultures. This was accomplished with small, protein-like molecules (peptides) that were constructed specifically for this purpose: They lower the degree in which the skin cells break apart under the influence of the antibodies by about half.

Next, the scientists have to test if this positive effect can also be achieved in living skin tissue. Should additional studies succeed, they possibly show the way to a new therapy against pemphigus. "We cannot administer the peptides themselves to humans because they could possibly cause immune reactions", explains Jens Waschke. Instead, a molecule has to be discovered that is structurally similar to the peptides and also has a similarly positive effect.

Pemphigus as a model disease

The researchers in Würzburg do not only focus on new therapies against the disease. They also want to gain fundamental insights. "Pemphigus is an important model to study which role antibodies play in the development of autoimmune diseases", says Jens Waschke. "Furthermore, we use the antibodies as tools to research the structure and regulation of contacts between cells." 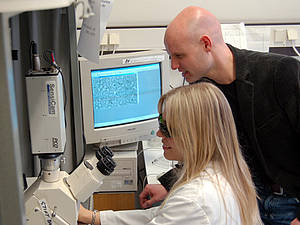 Professor Jens Waschke and his technical assistant Lisa Bergauer at the so-called laser tweezer. The bond relations between cells can be analyzed with this apparatus. Photo: Robert Emmerich

Waschke emphasises that the interdisciplinary cooperation in the Special Research Area 487 in Würzburg is jointly responsible for the success of the research. Through computer modelling, biophysicist Thomas Müller figured out which structures the peptides must have to be effective. Chemist Athina Efthymiadis synthesized the peptides, biomedical scientist Wolfgang-Moritz Heupel carried out the experiments with an atomic force microscope.

Enno Schmidt from the dermatology clinic, who has transferred to Lübeck in the meantime, acted as the link to the medical area: He isolated the damaging antibodies from the blood of a pemphigus patient.