Getting Kids to Exercise

PC, TV & Co see to it that a lot of kids lack exercise – at the cost of their health. In order to incorporate more physical activity into the daily routine of kindergarten kids, a team at the University of Würzburg Paediatric Clinic has developed an exercise programme. The results are encouraging. 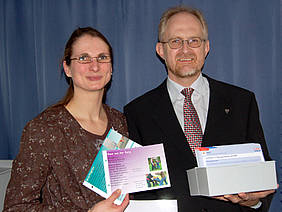 "The programme can be implemented in all kindergartens regardless of how they are equipped", says Professor Helge Hebestreit, leader of the project. "The kindergarten teachers see it very positively, the kids love it, the parents praise it." They observe their children to be more even-tempered, physically active and focussed than before. Hebestreit adds: "Above all, the programme improves the physical coordination skills."

41 kindergartens of the city and rural districts of Würzburg and Kitzingen have participated in the study. A total of 726 children (356 girls and 370 boys) in the age bracket of three to five years were involved. According to Hebestreit, the project is unique nationwide. Financially, it was supported by the Federal Research Ministry with funding in the amount of 280,000 EUR, and the health insurance company Gmünder Ersatz-Kasse also provided some financial backing.

Order of events of the Würzburg exercise programme

What does the programme look like? Over the period of one year, the teachers conducted a 30-minute exercise unit with the children on a daily basis. This was not about "hard" sports, but about the fun of exercising. For this purpose, the Würzburg scientists had developed a collection of games that help promote coordination, strength and other physical skills.

In addition to the half hour of sports each day, the kids were assigned exercise homework: Games that involve the whole family, but also those that can be played on one's own. One of them is box hopping: Several rectangular boxes that are connected to each other are marked on the floor with chalk. The kids then hop through this pattern according to pre-defined rules, now and then even on one leg.

In order to get mothers and fathers to support the programme, Hebestreit and his team had organized info meetings, distributed flyers and informed the parents in letters.

Clearly positive results after one year

The effort was worthwhile: After one year of the exercise programme, the researchers noted many improvements in the kids. Of statistical significance was the progress the children have made with regard to jump coordination and equilibrium, even three months after the programme was terminated.

Prior to the start of the programme, the scientists had collected health-related data of the children. They included but were not limited to height, weight, blood pressure and thickness of the skin fold on the upper arm as a measure for the percentage of body fat. Besides, there were examinations of motor skills testing jumping power, mobility and coordination.

The question whether the programme has slimmed down the chubbier kids could not be answered by the researchers with cast-iron proof. "We had very slender kids in the study to begin with", says the project coordinator, Dr. Kristina Roth: Only six percent of them were overweight or obese, with the federal average being around ten percent. The thickness of the skin fold on the upper arm as a measure for the amount of subcutaneous fatty tissue, however, did decrease in all physically active kids during the course of the year.

Why have an exercise programme at all?

In recent years, kids starting school had increasingly turned out to have postural deformities, organ inefficiencies, coordination disorders and inadequate motoric development for their age. Also, overweight, high blood pressure and elevated blood lipids were becoming more and more common, even in kids of kindergarten age. All these phenomena were, at least partly, a result of inadequate physical activity.

The reason why kindergarten kids were selected for the exercise programme was that the behaviour in this age group is more easily influenced by way of education. "Besides, for kindergarten children, there are hardly any studies on the preventive effects of exercise programs", says the professor.

This is how the project is going to proceed

More exercise for kindergarten kids: The programme is established, all those involved are enthusiastic, and it clearly has its positive effects. Where do we go from here?

"One of our big wishes would be for the programme to be integrated in the future training of kindergarten teachers", says Helge Hebestreit. The professor is also thinking about establishing a follow-up programme for primary schools. For he is convinced that there is potential for improvement with respect to sports and physical exercise in this field as well.

Informational evening at the Paediatric Clinic on April 1st

But first, the programme has to gain awareness, and access to further kindergartens. To this end, an event will take place at the Paediatric Clinic lecture hall on April 1st, at 5 pm. There, the kindergartens that have participated in the study will be provided with the necessary materials enabling them to continue to offer the exercise programme. Other interested kindergartens are welcome, and asked to register with Dr. Kristina Roth, roth_k1@kinderklinik.uni-wuerzburg.de, phone ++ 49 (931) 201-27101.