Bacteria that are resistant to antibodies pose a threat, particularly to people who are sick or feeble. In the search for new drugs, scientists from the University of Würzburg have made a breakthrough. 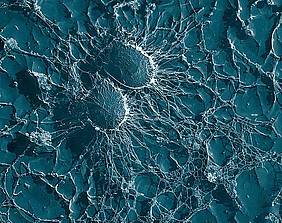 Every year, more than four million patients in Europe develop an infection while staying in hospital – this is because people with ill health are more susceptible than those who are healthy. Responsibility for these so-called hospital infections generally lies with the species of bacteria known as Staphylococcus aureus.

The acronym MRSA has achieved a degree of notoriety in this situation. It denotes strains of the Staphylococcus bacteria that are resistant to the antibiotic methicillin and which are almost impossible to combat using other active agents as well.

Staphylococcus aureus bacteria are also commonly found on the skin of many healthy people where they tend not to cause any problems. But if these pathogens find their way inside the bodies of patients with weakened immune systems, they cause inflammations that are very difficult to cure.

A promising approach to treating such infections has now been discovered by scientists from the University of Würzburg together with colleagues from the Helmholtz Center for Infection Research in Braunschweig. It is covered in the current issue of the journal Antimicrobial Agents and Chemotherapy.

“We have succeeded in activating a defense mechanism against Staphylococcus pathogens in mice with the help of antibodies,” says Dr. Udo Lorenz from the university’s Department of Surgery I. Together with outside lecturer Dr. Knut Ohlsen from the Institute for Molecular Infection Biology, he has spent the last few years pursuing the idea of combating antibiotic-resistant bacteria with antibodies.

The principle behind them: certain proteins, known as antibodies, are capable of attaching themselves to a very specific point on the surface of the bacterium. Once there, they can have the following different effects: no effect at all, as the worst-case scenario; as a better scenario, they neutralize the bacterium, preventing it from becoming active again; and, in the ideal scenario, they cause the body’s own immune system to destroy the bacteria.

Activating the immune effector cells: Lorenz and Ohlsen have now managed to do this in mice using an antibody that they themselves have developed. “We were able to show that the rate of bacteria destruction increased by 30 percent after the antibody was administered,” says Lorenz. 30 percent: a "truly dramatic advantage that could mean the difference between death and survival,” explains the medic.

The step from mouse to man

As the next step in their work, the researchers now want to transfer the antibody from mice to people. To ensure that there will be no undesirable rejection reactions, the entire molecule will need to be “humanized”. “We will take only the part of the antibody that docks to the bacterium and will build the rest of the molecule artificially so that it is suitable for people,” says Lorenz.

Once that has been done, the two scientists intend to make a start on the corresponding studies as soon as possible. If everything goes according to plan, Lorenz expects the first clinical study to take place at the end of 2012.

Plan to found a company

For their research into new immunotherapy to treat hospital infections involving resistant Staphylococcus aureus bacteria, Lorenz and Ohlsen are planning to found their own company shortly, which will be called: SmartmAb

SmartmAb will be given the task of developing the mouse antibody for use in people to the point where it is ready for its first clinical trial as a drug. The scientists will then seek to work with a partner from the pharmaceuticals industry on the steps that follow until the drug is ready for the market. The long-term goal is to establish a company that will seek to develop other immunotherapeutics to combat infectious agents based on the first antibodies.

The company’s founders will be receiving financial support from the Federal Ministry of Education and Research. They managed to beat 54 other applicants in the GO-Bio competition and will now be given around three million euros to progress their idea and create a marketable product.