What happens at the molecular level when a normal body cell is transformed into a tumor cell? Scientists at the Biocenter of the University of Würzburg have now managed to clarify this complex process in some new detail. 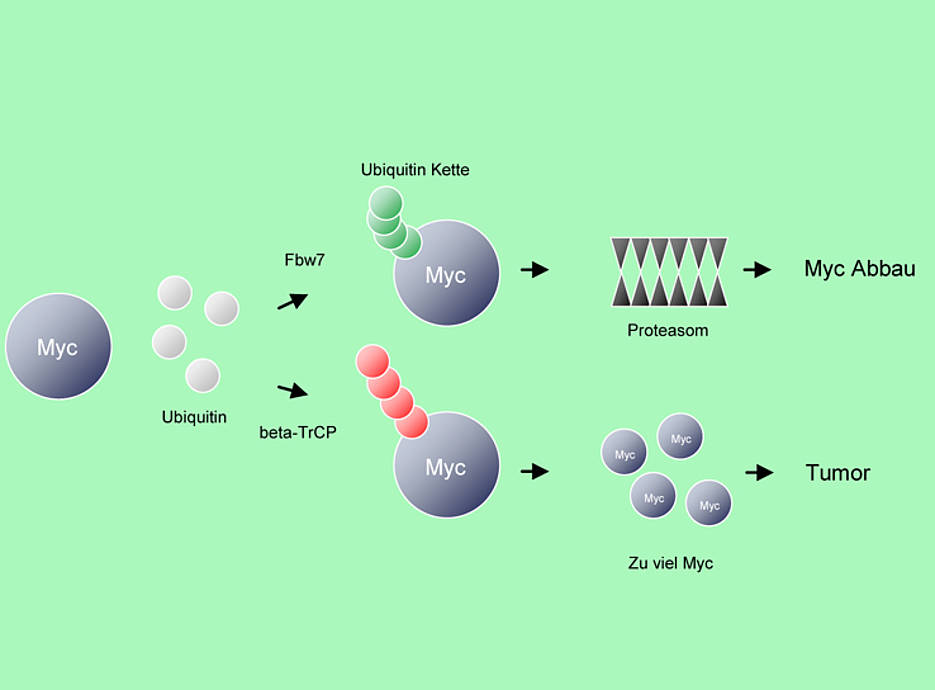 Many body cells are actually nothing else than miniaturized, but highly efficient chemical factories. They are continuously generating specific proteins, which fulfill their task at a different location and which are degraded at yet another location. Usually, this process is carefully balanced. If any disturbances drive the processes out of equilibrium, however, the respective cell might be transformed into a tumor cell. Such a cell will exhibit uncontrolled growth and division.

New finding on a central protein

A protein with the scientific designation "Myc" plays a major role in this process. "Myc proteins are indispensable for normal cell growth and division," explains Dr. Nikita Popov. Popov is a junior research group leader at the Department for Physiological Chemistry II of the University of Würzburg; in his research into the Myc proteins, he has now made an important discovery.

Cells need Myc – but only at a certain dosage. "Too high an amount of this protein induces increased cell proliferation and the formation of tumors," says Popov. In the normal course of things, this can be avoided because the Myc proteins are usually destroyed by the cell itself barely 30 minutes after their synthesis.

Protein chains give the signal for degradation

But how does the cell know when the protein needs to be degraded? It is quite simple: The protein is provided with a kind of label, indicating: "Scheduled for degradation!" For this purpose, a chain made from a different protein, called ubiquitin, is attached to the Myc protein. "This is the signal for certain enzymes to start work at this point," says Popov.

However, as the scientist has now found out, some problems may arise in connection with these protein chains. "The constituents of the chains need to be interconnected in a specific way to be recognized as signals." This special type of chain, which tags the protein for degradation, is attached to Myc by a protein called Fbw7. "Interestingly, human tumor cells often lack this Fbw7 protein," Popov observes.

The interconnection makes the difference

Nikita Popov has now discovered that a further protein, called beta-TrCP, is able to attach ubiquitin chains at the same position of the Myc protein; however, these chains are interconnected in a different way. While chains formed by means of Fbw7 cause the respective protein to be degraded, the chains attached by TrCP are not recognized as a signal for degradation. This leads to a stabilization of the Myc protein so that the Myc concentration in the cell does not drop too low.

"It is known that certain cancer cells produce an excessive amount of beta-TrCP. This might be the reason why they contain too much Myc and degenerate subsequently," says Popov. His new finding shows that ubiquitin chains do not only serve as a signal for degradation. If they interconnect in a specific way, they can also be used as a "stop signal", thus delaying the degradation of a protein. A normal cell can regulate its protein level in this way. If the regulatory system falls out of equilibrium, e.g. as a consequence of too much beta-TrCP or too less Fbw7, this may lead to the fatal result that a normal cell degenerates into a cancer cell.

The research of Nikita Popov is published in the current issue of the scientific journal Nature Cell Biology.