Faster road to employment for refugees

A lot of companies in Germany are having difficulties filling vacancies. On the other hand, many people who have fled war and violence at home want to stay and work here. The University of Würzburg has launched a project to connect refugees and companies more quickly. 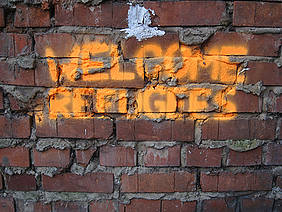 An increasing number of people from conflict regions worldwide are seeking refuge in Germany. The German Federal Office for Migration and Refugees estimates that around 40 percent will be recognised as refugees and are expected to stay in Germany on a permanent basis. Trade associations and companies consider this a great opportunity in the face of the present labour and apprentice shortage in many sectors.

How to quickly create career opportunities for refugees and connect them with companies? The new initiative "IntegrAi.de" is seeking a solution to this problem. The initiative was established in July 2015 by Professor Richard Pibernik and Professor Sascha Friesike with 15 students from the Department of Business Management and Economics of the University of Würzburg.

Richard Pibernik is a volunteer in refugee aid himself. So he has experienced up close how refugees spend most of their time waiting in the accommodation assigned to them – often for many months. "The initial phase in particular is decisive for whether integration into society and the labour market will be a success," he says, "the more time passes, the more difficult integration can become later on."

The professor knows how many organisations and volunteers are involved in refugee aid – and that they frequently work selectively and uncoordinated. "So far, there hasn't been a structured process in place which accompanies refugees, their supervisors and other important players from the first day. There is a lot of individual knowledge, but it is not pooled and hence it is not used optimally," Pibernik further.

An example: Volunteers work in the environment a refugee centre. They are familiar with the bureaucratic channels to be followed if a company wants to employ a refugee. A few kilometres away in another municipality, a company director might be willing to hire a refugee – but there is nobody around who is familiar with the process to act as an intermediary.

That is exactly where IntegrAi.de-Regio, one of the new projects, starts: The goal is to establish a web platform that accompanies refugees from early on in the refugee centre, helping them integrate into society and the labour market. The Würzburg team wants to differentiate this process to take into account language skills, education and other factors relevant to employing refugees.

"We don't want to reinvent the wheel, but our aim is to consolidate the existing offers and spot gaps," says Hannah Lea Diers, a business and medical student, who coordinates the project. The web platform is set to bring potential regional employers into contact with suitable candidates quickly. Hence, their strategy includes a close cooperation with regional companies.

All students who participate in the project are presently conducting needs assessments. They interview refugees, aid organisations and company representatives to find out what information is useful for the planned web platform.

For refugees this can mean knowing how to gain access to language courses and find a mentor early on. Regional Companies could benefit from information about eligible interns or employees and the formalities to be observed in case of employment.

The project's sustainability has top priority for the Würzburg team. Ultimately, the project is set to evolve into a self-funding non-profit organisation. They also plan to employ refugees in the projects on a long-term basis. "We are presently very busy scouting," Diers says.

Within the scope of "IntegrAi.de-Consult", a second project branch, students develop counselling solutions for municipalities that receive refugees. The background: Especially in smaller municipalities there is great voluntary commitment to help refugees, but often little knowledge about what can be done in terms of reasonable employment opportunities and qualification.

Here, the team aims to design solutions tailored to municipalities. The students are presently determining best practice approaches they want to make useful for other municipalities. Also they intend to boost networking activities and the exchange of experience between municipalities in general. 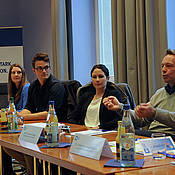