Katrin Paeschke is still a researcher at Princeton University in the USA. But in a few weeks’ time, she will be transferring to the University of Würzburg. Presented just under EUR 1.4 million by the German Research Foundation, she will be forming her own junior research group at the Biocenter. 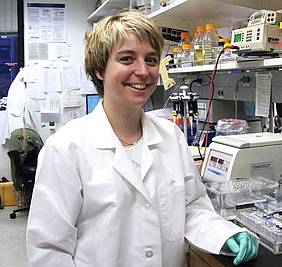 The human genome is the focus of Katrin Paeschke’s research. What causes a double strand of DNA to break sometimes? What causes the genome to lose its stability? And what role does the enzyme telomerase play in this? These are a few of the questions that the biochemist intends to explore. “Telomerase is currently known mainly for its role in maintaining the ends of our chromosomes,” says Paeschke. The enzyme is extremely active at the same time in cancer cells. The young scientist wishes to spend the next few years conducting more intensive research into the relationship between enzyme activity, chromosome breaks, and disease progression.

EUR 1.4 million for her own junior research group

For this purpose, she will be able to establish her own research group at the University of Würzburg’s Biocenter with the help of a grant of around EUR 1.4 million from the Emmy Noether Program run by the German Research Foundation (DFG). Through this program, the DFG aims to provide talented young scientists with the opportunity to achieve scientific independence more rapidly. During the term of the program, which is usually five years, the funding recipients should prove that they possess the skills to be a university lecturer by running their own junior research groups.

In addition to telomerase, Katrin Paeschke also studies other structures in the strings of genetic material, so-called G-quadruplex structures. The scientist was the first to prove the occurrence and regulation of G-quadruplexes in both test tubes and living cells. “We still do not know much about these structures, except that they are very stable and can lead to problems in various cellular processes if their formation and dissolution are not properly regulated,” she says. Paeschke is planning to look more closely at the function of G-quadruplexes and their significance for the cell together with her junior research group.

Many reasons for transferring to Würzburg

Paeschke cites several reasons for switching from Princeton to the University of Würzburg. Professional: “The University of Würzburg enjoys international recognition and has a very good reputation in biomedical research,” she says. Her research objectives would complement current research at Würzburg perfectly, so there would be nothing standing in the way of collaboration with other groups.

Personal: Katrin Paeschke is looking forward to seeing her new colleagues. “I am particularly impressed with the young and dynamic staff,” she says. In Würzburg she has met scientists who are open to new and creative research ideas and methods, which is why she is already looking forward to working with them.

Private: “As a nature lover who enjoys spending a lot of time in the countryside I was also thrilled by Würzburg’s surroundings and the huge variety of leisure opportunities,” says the scientist, who was named German Champion in double sculls rowing in 1995 and 1997 and who lists cycle racing, mountaineering, climbing, and jogging as outside interests on her resume.

Or, in one sentence: “Würzburg offers me a unique combination of high-quality international research, modern well-equipped laboratories, motivated and qualified students, and beautiful surroundings.”

Katrin Paeschke (born in 1979) grew up in Monheim am Rhein. Between 1999 and 2001 she completed a foundation course in biology at the University of Bonn, before switching to biochemistry. For her doctoral studies she attended the Institute of Cell Biology at the University of Witten/Herdecke. In 2006 she obtained her doctorate after writing a thesis on “The in vivo regulation of the telomere complex”. Since March 2007 she has been conducting research as a postdoctoral fellow at the Department of Molecular Biology at Princeton University.

The namesake of the Emmy Noether Program

Emmy Noether (1882 – 1935) was one of the founders of modern algebra. She was one of the first women to enroll on a course at a Bavarian university in 1903 after Bavaria granted women the right to a university education for the first time. She obtained a doctorate in mathematics from the University of Erlangen in 1907. In November 1915, she made an application to the University of Göttingen to be allowed to pursue a postdoctoral qualification (habilitation), which was rejected by the Prussian minister in charge; habilitations at Prussian universities were denied to women by a decree of May 29, 1908. It was not until the Weimar Republic was established that the habilitation regulations were changed to admit women. Emmy Noether was therefore able to pursue this qualification in 1919. In 1933 she emigrated to the USA.