Elementary school students are a role model for integration

First-graders readily include children from other cultures in their social interaction. This is the outcome of the country’s first study into the integration of migrants in this age group. The study was coordinated by the University of Würzburg. 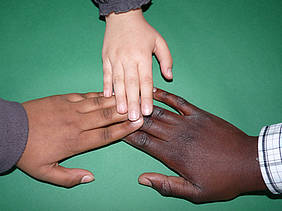 “This contradicts the prevalent image of an ethnic divide,” says project leader Professor Heinz Reinders from the University of Würzburg. “Inter-ethnic friendships are the rule rather than the exception among elementary school students.”

Children in Bavaria and Hamburg surveyed

The survey involved 979 first-grade elementary school students in Bavaria and Hamburg. The study covers friendships constellations as well as the cultural attitudes and skills of the children. It was carried out as a joint venture between the universities of Würzburg, Hamburg, and Mannheim; the Federal Ministry of Education and Research funded the study.

“The high degree of cultural openness and the positive inter-cultural experiences of the children are surprising,” says Heinz Reinders. The study reveals that just under two thirds of students of German origin find it perfectly normal to share a classroom with children from other countries. The same question met with a slightly higher endorsement from migrant children, at 72 percent. Only 16 percent of German children and 13 percent of non-German children indicate that they never play with peers who are of a different origin.

“For a start, this has to do with availability, of course. If there are only children of German origin at a school, it is not possible for them to forge inter-ethnic friendships,” says Reinders. However, he says that the findings also show that a high quota of migrants at a school does not have to be detrimental; instead it offers opportunities for social interaction.

“Inter-ethnic friendships and cultural openness are closely linked in children. Given that they do not tend to think in stereotypes yet at this age, this represents a good opportunity for schools to support cultural interaction,” concludes Reinders.

The inter-ethnic friendships do not end when school closes for the day: just under 69 percent of first-graders with friends who are of a different origin also visit each other at home. With consequences for the families: “The children bring their inter-cultural life into the living rooms of their parents," says Reinders.

Children as pioneers of integration

Almost a third of all children at German elementary schools have a migration background. For elementary school students particularly in urban areas there is therefore nothing unusual about being in a classroom with students from various countries of origin.

“This experience with living and breathing integration gives children an advantage over their parents,” says Reinders. “The public debates that adults have about ethnic ghettoization have little to do with the everyday reality of children.”

The head of the study also raises the point that language teaching is important if the opportunities for migrant children are to be improved for the long term: “Our study also shows, however, that social integration must be an integral part of the early support provided at the start of the school career in order to enable successful interaction.”