Ejaculation in the maize flower

Sperm swim to egg cells and fertilize them – at least that is what happens in people. In many flowering plants, however, the sperm cells are immobile. So, how do they reach their destination? Researchers from Würzburg and Regensburg know the answer. 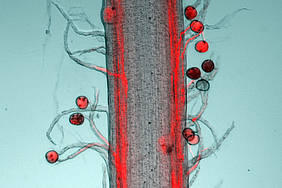 The sperm cells of flowering plants are found in pollen grains that are carried on the wind or by insects to other flowers. There they germinate: they form tubes containing two sperm cells each and penetrate the tissue of the ovary as far as the ovules. These contain the egg cells, each flanked by two helper cells.

How does a pollen tube find its way to one of the numerous ovules? This question has occupied the minds of plant scientists ever since Eduard Strasburger’s time (1844-1912). This botanist from Bonn had already successfully described fertilization in plants – based on nothing more than observations under a microscope.

“Today we know that the helper cells release a signaling substance that entices the pollen tube,” says Professor Thomas Dresselhaus from Regensburg. This finding was published by his working group in 2009. Together with plant researchers Dirk Becker and Dietmar Geiger from the Department of Molecular Plant Physiology and Biophysics at the University of Würzburg, the Regensburg scientists have now discovered a new signaling substance that lets the pollen tube rupture close to the egg cells. This result has been published in the magazine PLoS Biology.

Signaling substance in the defensin mould

The newly discovered signaling substance is a protein molecule that closely resembles the so-called defensins. Plants produce huge variations of these proteins in their male and female sex organs. Until now, science assumed that defensins protect the gametes and the developing seed against pathogens. This is because defensins are originally part of the immune system of animals and plants; they combat germs such as bacteria and fungi.

However, defensins clearly play an important role in sex between plants as well. This is borne out by the findings made by the Regensburg and Würzburg researchers using maize: in its ovules the helper cells release a special form of defense proteins, known as ZmES1-4 defensins.

One of the defensins entices the pollen tube, another causes it to rupture as soon as it is right next to the egg cells – a kind of ejaculation that sets the immobile sperm cells free so that fertilization can occur. “The ZmES1-4 defensins open potassium ion channels in the pollen tube,” reports Dirk Becker and Dietmar Geiger, “resulting in an explosive release of sperm cells.”

These findings offer the promise of new application possibilities: they mean that, where possible, the natural barriers that prevent cross-fertilization between different plant species can be overcome.

“It would be desirable, for example, to incorporate the properties of certain wild grasses into grains through cross-fertilization,” explains Dirk Becker. It may be possible to achieve such results in the future by manipulating the potassium channels or defensins.

Findings on the evolution of procreation

The researchers’ work also delivers fresh insights into plant evolution. “Our results indicate that even the very first plants on the earth some 470 million years ago and later also the flowering plants that first sprung up around 170 million years ago used disease defense mechanisms and adapted them to develop new procreation strategies.”

Dr. Dirk Becker, Department of Botany I – Molecular Plant Physiology and Biophysics at the University of Würzburg, phone +49 (0)931 31-86108, dbecker@botanik.uni-wuerzburg.de