Proteins that embrace their partners and induce a breaking point through thermal motion: In the course of evolution, cells have developed a lot of tricks in order to do their tasks successfully. University of Würzburg researchers have now clarified amazing details of such a process. 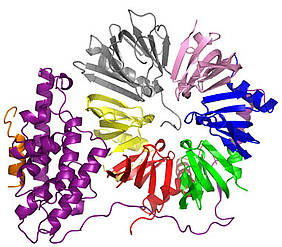 A human cell basically represents a chemical factory in miniature. It is continuously busy synthesizing proteins with which to perform its numerous tasks. The process of protein biosynthesis is implemented by means of large "molecular machines" that must first be meticulously assembled by the cell. The spliceosome is an example of such a machine. For a long period of time, there were only rudimentary approaches to the question as to how it is generated. Scientists from Würzburg and Göttingen have now succeeded in clarifying a lot of open questions, as reported in the latest edition of the journal Molecular Cell.

The spliceosome – a complex machine

"The spliceosome is one of the most complex machines in the cell. It is continually subject to restructuring, it exchanges proteins and is generally very dynamic in nature," says Professor Utz Fischer. The head of the Department for Biochemistry has been researching this complex for more than 15 years now. Spliceosomes control the translation of the genetic code into proteins inside the nucleus. They remove the sections without protein-coding information from the messenger RNA and link the information-containing units back together. They are generated by the cell itself – albeit outside the nucleus in the so-called cytoplasm.

This cytoplasm should not be pictured as a neatly arranged assembly hall providing a lot of space for the respective work – quite the contrary. "The conditions are inconceivably cramped there. Scientists use the term 'molecular crowding' in this context," Fischer explains. In order nevertheless to be able to collect and assemble the required components for the molecular machines in one particular place within a very short period of time, the cell recruits special helpers, the so-called chaperones. A particularly "crafty" chaperone is used in the case of the spliceosomes, as the Würzburg scientists were able to show.

How spliceosomes are constructed

Human spliceosomes consist of well over 100 proteins and five small non-coding RNAs. These numerous components form a number of defined functional units, the most prominent representatives of which are the so-called snRNP complexes. These all have a similar structure: Seven evolutionarily related "general" proteins form a ring-shaped "core" structure, through the middle of which runs an RNA strand. In addition, there are further specific proteins; these are responsible for ensuring that the respective snRNP subunits carry out very specific tasks within the splicing process – a sort of macromolecular division of labor.

If you put RNA and the relevant proteins in a test tube, the core structure of the snRNPs assembles spontaneously after a while," explains Utz Fischer. In a cell, this process would not be effective enough. Waiting for the respective proteins to come together at the correct location while hoping that they will find their specific target RNA: "This would slow down the biological processes dramatically and would also cause too many errors," the biochemist notes. For this reason, the cell takes an active approach to the process and makes use of chaperones. These have the task of arranging the seven general proteins in a ring structure and connecting them to the RNA strand. This is done in two steps as the team of researchers has now been able to show for the first time.

Caught in a kinetic trap

This process is simplified by the fact that the seven general proteins group together into three different "components" even before. These three have roughly the shape of pie slices. If they align themselves with their contact points alongside each other, the approximate shape of a pie appears as seen from above, with a hole in the middle, through which the RNA strand can run.

Two of these three components are brought together by the "assembly chaperone" pICln. It sort of pretends to be the third component, taking its place and thereby bringing the pie or ring into shape. However, there is the problem that it does not give up this place "voluntarily", i.e. without energy supply, to make room for the real component. The complex is caught in a "kinetic trap".

The way out of the trap

How does it get out of the trap? "A gigantic machine, the so-called SMN complex, takes on this work," Fischer explains. About twelve years ago, Fischer identified this complex himself. At the time, researchers were looking for trigger factors of the disease "spinal muscular atrophy", which is caused – as became known a short time later – by reduced quantities of a protein belonging to the SMN complex. As a consequence, patients have an insufficient amount of SMN complexes available so that their arm and leg muscles are floppy and limp; in severe cases, the pulmonary muscles are affected as well. Since then, Professor Fischer has never stopped pursuing his research on the SMN complexes.

"The task of the SMN complex is to open the closed ring, which is kinetically blocked," says Fischer. It performs this task with a combination of an embracing and disruption strategy: With the help of a special protein structure by the name of "Gemin2", the SMN complex approaches the ring in a way that an arm-like protrusion of Gemin2 makes contact with the neighboring component. Then the SMN binds to the upper side of the ring – precisely at the spot where the kinetically blocked chaperone is located.

The consequences are described by Fischer as follows: "The ring becomes unstable and starts to vibrate at a specific point, shortly after which the whole system breaks apart." This makes room for the missing third component and the RNA strand. However, it is still an open question how these get there.

Utz Fischer's team was able to make these observations with a combination of X-ray crystallography and electron microscopy. In a collaborative project, involving the laboratories of Clemens Grimm, the head of the crystallography unit of the Department for Biochemistry, Jann-Patrick Pelz as well as Hermann Schindelin and Caroline Kisker of the Rudolf Virchow Center, the scientists succeeded in identifying the structures of the complexes concerned and in clarifying the processes inside the cell. The project also involved Fischer's former colleague Ashwin Chari, who now conducts his research in Göttingen in the study group of Holger Stark at the Max Planck Institute for Biophysical Chemistry.

Such a huge effort to produce one particular structure: Is it reasonable? "Yes," says Fischer. In his opinion, the indirect processes, the intermediary steps and the interventions of the chaperones are necessary in order to avoid "production defects". This is important because "many of the proteins involved are potentially dangerous," he explains. Without appropriate control, they might get attached to unsuitable RNAs or even form non-functional aggregates with other proteins. In the worst case, the latter possibility can lead to diseases as is well known from the example of Alzheimer's disease and Parkinson's disease.