From Neuburg on the Danube River to Prague, Cracow, Berlin, and back to Neuburg: a tour of more than 1370 miles, covered within three winter months on horseback, on snow-covered trails and mud-clogged routes. In 1536 a Bavarian prince, Otto Henry of Wittelsbach, Count Palatine of Palatinate-Neuburg, and his painter set out for Cracow. The travellers’ tour stops are recorded on large-scale coloured drawings, presenting today the earliest known purlieus of many cities in Bavaria, Bohemia, Poland, Silesia and Saxony. Wuerzburg University Library now invites internet users to trace Otto Henry’s paths on screen. 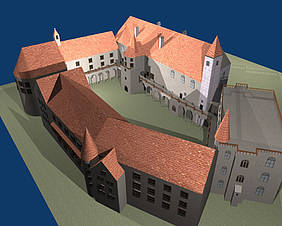 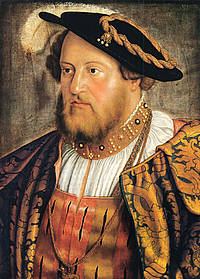 When Bavaria’s bishoprics and monasteries were dissolved in 1803, countless precious documents, manuscripts and books from the neighbouring ecclesiastical institutions were brought to Wuerzburg University, among them a seemingly unimposing volume of 50 coloured drawings from the Franconian monastery of Ebrach. The delineations show Central European cities, castles and villages, all of them annotated by identifying cartouches. Some two hundred years later, a scientific workgroup brings to light that the views are the oldest extant graphical representations of most of the places depicted and that they form an ensemble: They are the stopovers of a journey whose starting point is Neuburg in Upper Bavaria. Its sovereign in 1536 is Otto Henry of Wittelsbach, aged 34, parading a monumental waistline, but in debt up to the ears. To save his principality from going bankrupt, he travels to Cracow to encash the still outstanding dowry of his Polish grandmother Jadwiga Jagiellonka, amounting to some 32000 florins. Otto Henry is escorted by an anonymous painter who depicts fifty of the destinations en route. Digitized, zoomable and incorporated in a comfortably navigable user interface the highly light sensitive watercolour paintings now can be explored on the internet regardless of conservational constraints. Notes on the sites’ history and on Otto Henry’s trip to Cracow accompany the impressive paintings, giving topographical and historical background information. A 3D-animation graphically simulates the architectural state of Neuburg Castle in 1536.

By staging this online project, the Library and the Chair of Information Science II of Wuerzburg University (Prof. Dr. Juergen Albert) hope to establish a basis for further research into this unique album of drawings: The pictorial documentation of a prince’s voyage of the 16th century thus might develop into new European teamwork across country borders.