It is a kind of revolution for the Ancient Near Eastern Studies. High-resolution 3D scans of ancient clay tablets with cuneiform inscriptions and newly developed computer technology expand the research horizon. Scientists from Würzburg, Dortmund and Mainz are pushing on the unique project. 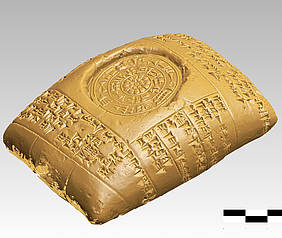 In the three millennia before Christ, a high culture existed in the Near East which left a wealth of information about itself: on clay tablets written in cuneiform script. Cuneiform characters were imprinted on a wet clay tablet with a stylus and subsequently dried to create a long-term durable document.

More than 500,000 such tablets have been discovered to date. They provide intriguing insight into the world of the ancient Near East. The inscriptions portray the making of drugs to treat diseases, the course of wars, religious rituals or bureaucratic acts. An excellently preserved royal deed of gift for land, for example, gives detailed account of who was involved in the donation and which persons were present as witnesses.

Even though ancient Near East researchers can read cuneiform script, deciphering whole texts is a tedious or even impossible task. This is due to the fact that the ancient clay tablets are often fragmented into small pieces and scattered over museums worldwide. "On principle, we are facing thousands of jigsaw puzzles that have been mixed up and have to be sorted and assembled before we can read them," says Gerfrid Müller, Professor at the Department of Ancient Near Eastern Studies of the University of Würzburg.

Putting together pieces of an ancient jigsaw puzzle using high-tech

Reconstruction of ancient clay tablets as a jigsaw puzzle: This task will be much easier and more reliable to perform in the future – thanks to a research project that has been running quite successfully for two years. Researchers of ancient cultures and computer scientists have developed methods that allow clay tablet fragments and the cuneiform writing on them to be analysed with great precision. The "3D-Joins und Schriftmetrologie" project is funded by the German Federal Ministry of Education and Research (BMBF).

"Our achievements so far are revolutionary and unique in the world," says project manager Gerfrid Müller. First, the researchers scan the clay tablet fragments using high-resolution 3D scanners. Computer scientists then take the data to develop new methods to exactly determine the characteristics of the tablets and the writing. In the last step, the pieces of the jigsaw puzzle are put together with the help of computers to create reconstructed 3D models of clay tablets which are the basis for the scientists' text work.

Focus on the writing styles of individual writers

One focus of the project is on the analysis of writing styles. How is that possible? After all, handwriting in the modern sense did not exist in the Ancient East. But the ancient writers already had their very own style when working the soft clay with their styluses. One writer would pull the stylus out of the clay in a swift motion to create a kind of "twist", while another pressed the letters into the clay with a characteristic spacing.

Such characteristics of the different writers can be exactly analysed using the high-resolution 3D models. And this method will ultimately enable the ancient Near East researchers to assemble the clay tablet jigsaw based on writing characteristics. "We already found out that one tablet reconstruction believed to be correct can't be right," Müller says. The previous approach to solving the puzzle, consisting of plaster casts, photos and text copies was just no accurate enough. The new method now enables assembling the clay tablets more conveniently and quickly.

Focus on clay tablets from Hattusa

For the project the researchers initially focused on cuneiform inscriptions from the ancient city of Hattusa in East Anatolia. Since 2001, these texts have been listed as UNESCO World Cultural Heritage; the research centre "Hethitische Forschungen" (Hittite Research) of Akademie der Wissenschaften und der Literatur in Mainz (Academy of Sciences and Literature) is in charge of the reconstruction.

Among the 30,000 text fragments from Hattusa 6,000 to 9,000 fragments are particularly interesting for the scientists. They describe festive rituals with frequently recurring cult instructions, which means that all pieces of the puzzle look quite similar. This is why these tablets are extremely difficult to reconstruct using ordinary means. The new technique should make this relatively simple.

Scans from Ankara, Berlin and Istanbul

So far Müller and his co-worker Michele Cammarosano have scanned 1,800 tablet fragments found at the Hattusa site. For this purpose, Dr. Cammarosano worked in museums in Ankara, Berlin and Istanbul, among others. He is continuing his scanning activities, and also the computer scientists involved are working on new algorithms. One of their goals is to use the curvature of the tablet fragments for the assignment in the jigsaw puzzle.

According to Gerfrid Müller, the medium-term project goal is a cuneiform database which is to be made publicly available via the internet and accessible for other research teams. This could be the case in 2016 presumably. The database will allow the ancient Near East researchers to work even more efficiently on learning about the ancient Near East from the cuneiform texts.

For a brief demonstration of the 3D models of the cuneiform tablets and how they can be manipulated on the screen, go to the project homepage: (http://www.cuneiform.de/en/interaktives-portal/downloads.html)

This project is a collaboration of the Würzburg Department of Ancient Near Eastern Studies (project manager Gerfrid Müller and Michele Cammarosano) with the research centre "Hethitische Forschungen" (Hittite Research) of Akademie der Wissenschaften und der Literatur Mainz (Academy of Sciences and Literature) (Gernot Wilhelm) as well as the Department of Graphics Systems (Informatik VII) of the Technical University of Dortmund (Denis Fisseler and Frank Weichert).

To the homepage of the department (http://www.altorientalistik.uni-wuerzburg.de/en/start_page/) 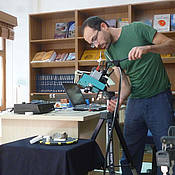 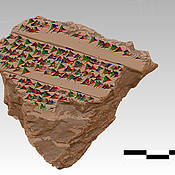 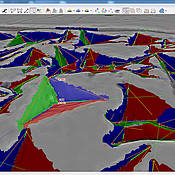 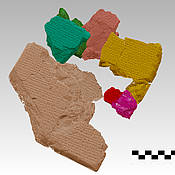 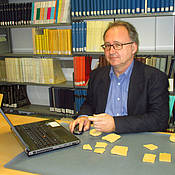