Communication in an Indirect Way

Organic materials are comparatively poor conductors of electricity. Under certain conditions, however, this can change significantly. University of Würzburg physicists have now experimentally determined how exactly such a change in conductivity works in a two-dimensional layer. 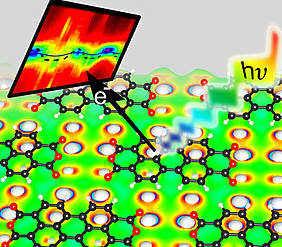 Organic semiconductor materials have numerous advantages: They are inexpensive to synthesize in large quantities, easy to process, mechanically flexible and resource-efficient. However, their large-scale use in technological applications, such as optoelectronic components, is hampered by the fact that they generally conduct electric current rather poorly. But their conductivity can increase significantly in special conditions. Together with scientists from Graz and Hiroshima, University of Würzburg physicists have now clarified the reason why this is possible. Their research is reported in the current issue of the journal Nature Communications.

"If organic molecules are deposited on a metal surface, the direct bond between these molecules is usually relatively weak," Achim Schöll explains. "The individual molecules mainly interact with their substrate instead." Schöll, a private lecturer at the Department for Experimental Physics VII of the University of Würzburg, has been spending many years of research on molecules that might be used in organic semiconductor electronics. In his latest experiments, he was able to show that the rule about the weak intermolecular interaction does not always apply.

For this purpose, the physicists deposited an ordered one-molecule-thick monolayer of organic molecules on a metal substrate in an ultrahigh vacuum. "Thus, we virtually created a two-dimensional semiconductor, in which the arrangement of the molecules is determined by the metal substrate," Schöll describes the method. When arranged in this way, the organic molecules exhibit quite unusual behavior.

"We have verified that the electrons of the organic molecules now make contact with neighboring molecules – which process is mediated by the metal substrate," Schöll explains. In other words: The electron clouds of neighboring molecules assume a shared state, in which the metal is also involved. This facilitates the exchange of charge carriers, thus enhancing the conductivity of the organic material. What makes the results so fascinating is the fact that the molecules "communicate" with each other only indirectly by way of the metal substrate, as Schöll points out.

When conducting their measurements, the physicists came across another phenomenon as well: "The magnitude of this communication is highly direction-dependent," Schöll notes. This means that the two-dimensional layer of molecules is able to transfer charge carriers relatively easily in one specific direction whereas charge transport is significantly reduced in other directions. This is due to the internal structure of the molecules and their special arrangement on the metal substrate.

The specimens used by the Würzburg physicists look like fingernail-sized metal disks. There is more to them than meets the eye, though, their preparation and examination involving a high degree of technological sophistication. In order to create layers of sufficient purity and order, for instance, you need a so-called ultrahigh vacuum, an extreme vacuum where the residual gas atoms are few and far between. In such a vacuum chamber, the pressure does not exceed 10 -10 millibar, which is below the pressure in near-earth space.

High tech equipment is also used to trace the behavior of the electrons in the specimen – the relevant method is called angle resolved photoelectron spectroscopy. An electron storage ring, i.e. a type of particle accelerator, producing so-called synchrotron radiation, serves as a source of UV radiation, which enables the researchers to take a look into the nanoworld.

"This work is basic research in the field of nanoanalytics," says Schöll. For any future applications, however, it is essential to comprehend the complex interactions between organic molecules and the metal substrate. With their publication in Nature Communications, the researchers have by no means exhausted this topic. In further experiments, Schöll now intends to explore how a combination of various molecules, another substrate and a different arrangement of the molecules impact on the behavior of the electrons. The results from these experiments might be used to produce tailored two-dimensional networks with special electronic properties.