If climate change continues unabated, it is likely to endanger numerous wild bees in high mountains and cooler regions of the globe – with unforeseeable consequences for biodiversity there. This is the conclusion being drawn by scientists from the University of Würzburg’s Biocenter based on their research. 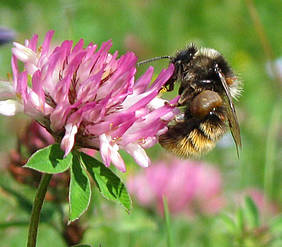 Glaciers are melting, permafrost soils are thawing: global warming is also evident in high mountains. And, obviously, the higher temperatures there will have an impact on plants and animals, such as wild bees, the main pollinators of both wild and cultivated plants.

How do different climatic conditions affect the diversity of wild bee species? Which traits of these bees are vital to their survival in alternative climates? This was the subject of the research conducted by Würzburg biologists Bernhard Hoiß, Jochen Krauss, and Ingolf Steffan-Dewenter at Berchtesgaden National Park. “The National Park is perfect for this because you find major differences in altitude there in a confined space and, therefore, major differences in climate as well,” explains Hoiß.

At heights of 600 to 2000 meters, the Würzburg researchers accounted for a total of 87 species of wild bee. Just 19 of these are classified as bumblebees. The species richness and population numbers are around two to three times greater in the warm, lower-lying areas than in the meadows higher up.

The following traits are common to the communities of species that live in colder conditions: organization into social insect colonies, building of underground nests, larger bodies and a greater altitudinal distribution. The majority of species in higher locations are only spread over a small area and have adjusted to alpine and cool habitats.

These evolutionary adjustments to adverse climatic conditions in mountainous regions are at the sacrifice of competitiveness. This means that if species with similar needs but less tolerance to the cold were to infiltrate the habitat of “high mountain specialists”, these would be at a disadvantage because, for example, their flowers would now be used as a source of food by other bees as well.

“Their reduced competitive ability could spell disaster for the specialists if the more dominant, heat-loving species conquer alpine habitats as the climate becomes warmer,” says Bernhard Hoiß. This would put the survival of wild bees that specialize in high altitudes in jeopardy. The same effect is expected for regions at high latitudes, such as northern Scandinavia.

Describing the impact on the plant world

How will the forecast depletion of wild bees affect pollination and, with this, the diverse plant communities in the regions concerned? This is the next question the Würzburg biologists are looking to answer. They have already conducted their first experiments relating to this at Berchtesgaden National Park.

These findings were compiled as part of the FORKAST research project. The project is being funded by the Bavarian State Ministry of Sciences, Research and the Arts within the framework of the “Climate Program Bavaria 2020”. 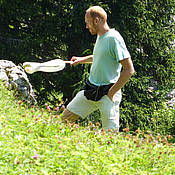