A special camouflage allows parasitic wasps to raid the nests of host species. The affected hosts seem to have responded to that in the course of evolution as Würzburg biologists report. 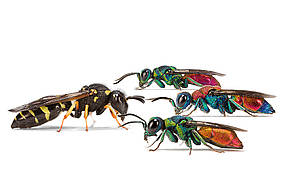 Three parasitic species of cuckoo wasps at the same time have targeted the food provisions in the nests of mason wasps. (Pictures: Oliver Niehuis, ZFMK Bonn)

Certain wasp species behave similar to cuckoos: They intrude into other nests, destroy the offspring, deposit their own eggs and leave their larvae to feed on the host's food provisions. Actually, the involuntary hosts are supposed to detect the intruders: All insects are covered by a layer of cuticular hydrocarbon molecules that always leave a "scent trail" behind. But the parasitic wasps are camouflaged efficiently: Mimicking their hosts' scent profile, they become invisible.

Professor Thomas Schmitt from the University of Würzburg's Biocenter is studying a particular case of parasitic wasps: The spiny mason wasp (Odynerus spinipes) is native to Central Europe. It is a solitary wasp species that builds its nests in the ground and serves as a host to three species of cuckoo wasps at the same time. That is unusual since the parasitic relationships of cuckoo wasps usually involve exactly one parasite for one host.

Results published with the Royal Society

How can the three-parasite system work without them getting into the way of one another? Schmitt and his Ph.D. student Mareike Wurdack looked into this question and discovered something unexpected in the host wasps' camouflage. The results have been published in the magazine "Proceedings of the Royal Society".

One of the three parasitic cuckoo wasp species (Chrysis viridula) goes its very own way: It waits until the mason wasp has laid its eggs, supplied food provisions and sealed the nest. The offspring will develop independently; the owner of the nest never returns. This means the way is free for the parasitic wasp: It digs up the nest and lays its eggs inside. This strategy does not require any camouflaging and consequently this cuckoo wasp's hydrocarbon profile clearly differs from that of the mason wasp.

The other two cuckoo wasp species (Chrysis mediata, Pseudospinolia neglecta) take a different approach. Entering the host nest before it is sealed, they and their eggs go undetected, because they have the same "body odour" as the owner of the nest. At this point, the Würzburg biologists discovered something baffling: The two parasites do not have the same body scent, rather they differ significantly.

So the scientists checked the hydrocarbon profiles of the mason wasps and found that they, too, had two "chemotypes": "The hosts produce either the one or the other type and the parasites have specialised accordingly," says Schmitt. This finding was confirmed in all three areas the biologists studied: near Würzburg, at the Kaiserstuhl hills near Freiburg and in the Palatinate.

Theory of the evolution of chemical camouflaging

"Our results back the theory that the similarity of the hydrocarbon profiles of cuckoo wasps and their hosts are caused by chemical camouflaging," says Mareike Wurdack. "We also assume that a second chemotype developed in the mason wasp during evolution with the goal to escape parasitic infestation," Schmitt explains. Too bad for the wasp that another parasite adjusted to this evasive strategy.

Teaming up with Oliver Niehuis from Bonn (Research Museum Koenig / Leibniz Institute for Animal Biodiversity), Thomas Schmitt will investigate whether this evolutionary-biological scenario and the molecular mechanisms for creating the chemotypes are true in the next three years. The German Research Foundation (Deutsche Forschungsgemeinschaft DFG) has recently approved a corresponding application by the two scientists.