Cancer: No Tumor without Cooperation

Tumors disappear if you inhibit the genes responsible for their formation. Previously, any suggestions as to why they behave in this way were nothing more than theories. Researchers at the University of Würzburg now present concrete evidence, confirming a long-held assumption in this matter. 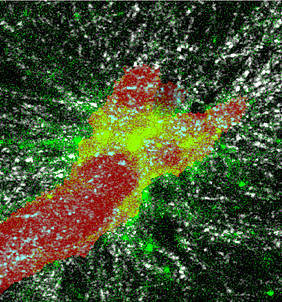 Oncogenes carry the genetic blueprint for proteins that cause unregulated cell proliferation. However, these proteins usually need to interact with other partners in order to trigger the tumor growth. If this interaction is disturbed, the tumor stops growing.

Concerning the reasons for this, there has been a theory around for many years, supported by some test-tube findings. Scientists at the universities of Würzburg and Stanford now have succeeded for the first time in confirming this theory with examinations performed on a living organism. Their results are published in the current issue of the scientific journal Genes & Development.

The role of the oncogenes

Nearly all human cells have a certain group of genes, which play an important role in the formation of cancer – the so-called Myc genes. Usually these genes are not read out very frequently; they serve as a blueprint for Myc proteins, which fulfill some functions in cell growth and are required only in small amounts.

If the Myc genes do not work properly, the cells start to divide in an uncontrolled way, resulting in tumor formation. The above-mentioned team of scientists have taken a closer look at this process. "The theory that Myc proteins bind to another protein, the Miz1 protein, to regulate a group of genes important for tumor growth has already been in place since 1997," explains Martin Eilers.

Eilers is head of the Department for Physiological Chemistry II at the Biocenter of the University of Würzburg. As early as in 1988, when he conducted his postdoctoral research in San Francisco, he started to study the Myc genes and proteins. He was a member of the research team that developed the theory of the protein interaction in 1997.

Now two of the postgraduate students in his team, Judith Müller and Tobias Otto, together with their colleagues from Stanford University (California), have succeeded in confirming this theory with examinations performed on a living organism.

A genetic mutation reduces the number of cancer diseases

"Tumor cells cannot do without the continuous support from the genes responsible for their formation," says Eilers. If this support is lacking, the tumor cell collapses. "Until now the reasons for this have never been fully understood," he adds. The phenomenon can be explained by the Myc-Miz interaction.

"Tumor cells carry an intracellular program, the actual function of which is to prevent them from proliferating without control," explains Martin Eilers. In other words: A tumor cell tends to commit suicide or to refuse to work. Firstly, it can start the process of programmed cell death – a damaged cell kills itself off to protect the whole organism from greater harm. Scientists refer to this process as apoptosis. Secondly, the cell can stop its life cycle; in this case, it does no longer divide but still remains physiologically active. The technical term for this is cellular senescence.

The senescence is only prevented via the interaction with the Miz1 protein. The scientists were able to prove this by modifying the Myc gene at a specific location. As a consequence, the corresponding protein was altered in such a way that it could no longer bind effectively to Miz1. In laboratory animals carrying the mutated gene, the cancer rates were significantly reduced. The result is a bit strange: A mutated gene reduces the number of tumors. Isn't it the gene mutations that are usually responsible for a multitude of cancer diseases?

So why isn't this true in this case? "Myc needs to bind to Miz1 in order to prevent the cell from producing certain tumor-inhibiting factors," explains Martin Eilers. Myc and Miz cannot impose continuous growth on the cell unless they work together. Only their interaction can prevent the cell from implementing its normal biological aging program.

So far, the findings of the Würzburg and Stanford scientists have no direct consequences for cancer therapy. At present, the Myc-Miz complex does not represent a promising starting point – the process is too complicated for this. "We still do not know enough about its physiological function," says Eilers. Therefore, as a next step, Eilers and his team would like to clarify the role of the protein interaction in the normal development of the cell.