Researchers have found a possible approach for a new therapy of a malignant tumor of the immune system. They present their research in the scientific journal Nature. 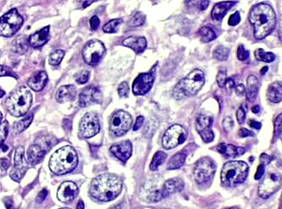 The so-called lymphoma, which are cancers of the immune system, originate in white blood cells. Pathological B cells, for instance, are responsible for the “diffuse large B cell lymphoma”, which progress very aggressively if left untreated. In Germany, about 3,000 people are affected by this disease each year. Usually, the patients complain of fever, night sweats and weight loss. Furthermore, they are often pale and tired and exhibit swollen lymph nodes.

25 percent of the patients die

“With a combination treatment of immunotherapy and chemotherapy, this kind of lymphoma can be kept under long-term control or even be cured in about 75 percent of the cases,” says Professor Andreas Rosenwald, who works as a pathologist at the University of Würzburg. Why about 25 percent of the patients die from this cancer is still not completely understood at present.

In recent years, an international research consortium, including Rosenwald’s team, has defined two main biologically and clinically distinguishable subgroups of the diffuse large B cell lymphoma.

Now, the researchers have established: In one of these subgroups, a B-cell-specific protein, the so-called B cell receptor, is chronically stimulated. Obviously, this is conducive to the growth of the tumor. “The biological mechanism leading to the continuous stimulation of the receptor was unknown till now. It has been described for the first time in our publication in Nature,” explains Rosenwald.

Possible approach for a new therapy

This new finding might be used for future therapy. For instance, it is conceivable that some medication with so-called kinase blockers could be used to curb the out-of-control stimulation. However, this possibility must first be tested in clinical trials over the coming years.

A further assumption must also be examined: There are indications that the chronically stimulated B cell receptor may be responsible for at least some of the cases in which the lymphoma patients die despite receiving treatment.

Eight partners in the consortium

The international consortium that has launched this publication in Nature consists of eight institutions from the USA, Germany, Canada, Norway and Spain. The German contributors to the research are the Würzburg professors Andreas Rosenwald, Hans Konrad Müller-Hermelink and German Ott. Professor Rosenwald has been the director of the Institute of Pathology at the University of Würzburg since September 2009.

“The partners in the consortium have been working closely together since 2000 and this collaboration has proven to be very productive. So far, we have launched about 50 joint publications, several of them in highly regarded journals, such as Nature, Science and the New England Journal of Medicine,” says Professor Rosenwald. The success of these studies can only be ascribed to the intensive international teamwork of molecular biologists, genome researchers, hematologists and pathologists – any individual institution would have been overwhelmed by the task.

With its internationally recognized interdisciplinary research projects spanning many years, the consortium has submitted an application for the Team Science Award, a renowned annual award established by the American Association for Cancer Research, which is worth 50,000 dollars in prize money. The scientists consider their chances of winning the award to be quite good.

For the current publication in Nature, Rosenwald’s team participated in providing a more detailed pathological and genetic characterization of the respective lymphoma cells in the examined cases. Lymphoma are a specialist field of the Würzburg researchers; the Institute of Pathology at the University of Würzburg is one of six nationwide reference centers for lymph node pathology in Germany.