It was an extraordinary spectacle in the Perseus galaxy cluster: An international team of astrophysicists detected an exceptional flare in the gamma-ray spectrum during observations of galaxy IC 310. This meant that particles had been accelerated to extremely high energies in a very small space. 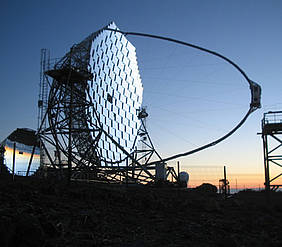 Supermassive black holes with masses of up to several billion suns are commonly found in nearly all bright galaxies surveyed by astronomers so far.  One such black hole is located in the centre of galaxy IC 310 in the Perseus galaxy cluster. The galaxy is also known for a jet that emits plasma out of the centre of the galaxy several hundred thousand light years into space. For clarification: One light year equals 9.461 billion kilometres. The jet's luminosity is equivalent to that of ten billion suns.

The origin of the jet and the physical processes responsible for releasing this massive amount of energy continue to baffle scientists. Analyses of observations made by an international team of astrophysicists in November 2012 now shed some light on the phenomenon. The Würzburg astrophysicists Professor Karl Mannheim and Professor Matthias Kadler and their teams contributed to the work. They present their research findings in the latest issue of Science magazine.

A source behind the event horizon

"We initially focussed on the gamma-ray spectrum in the observation of the galaxy IC 310," Karl Mannheim explains their approach. The object's luminosity suddenly began to flare extremely. Since the brightness decreased and increased again in a matter of minutes, the physicists were certain: The source of this gamma radiation had to be smaller than the event horizon of the massive black hole in the centre of the galaxy IC 310. Event horizon: This is the term used by the scientists to refer to the area around a black hole where light is forever trapped. Consequently, information about events taking place behind this horizon can never reach an outside observer.

Since the resolution capacity of astronomic telescopes is presently insufficient to observe black holes directly, the astrophysicists used MAGIC, a system of two imaging atmospheric Cherenkov telescopes located on the Canary Island of La Palma. Matthias Kadler contributed additional observations via the European network of radio telescopes (EVN) that showed a plasma jet being erupted by an extremely compact source. The researchers probably witnessed an event that could best be described as "black hole lightning". "The black hole at the centre of IC 310 seems to spin intensely. Like a dynamo it thereby causes an electric flow of particles, which travel almost at the speed of light, and emit gamma radiation," Mannheim interprets the event.

High acceleration in a confined space

The time variability of a radiation source also contains information about its spatial structure, because luminosity variations can only propagate at the finite speed of light. Since variability on the shortest time scale was observed in this case, the scientists concluded that the particles were accelerated to extremely high energies in a very compact space.

Dorit Eisenacher Glawion, a doctoral candidate at the University of Würzburg, recalls: "We already knew that the event horizon of the black hole in IC 310 was greater than three times the radius of Earth's orbit. We were therefore completely taken aback that the time variability only amounted to a fifth of that distance."

Scientists have long theorised that massive black holes produce large amounts of energy at the expense of their rotational energy. The jets are generated in the ergosphere, a region just outside the event horizon. Space-time rotation and the ergosphere plasma inside cause an electric potential that accelerates particles to very high energies similar to pulsars. They then generate gamma radiation and avalanches of secondary particles which are emitted as plasma jets.

The European network of radio antennas actually already proved the existence of the jet at the scale of a few light years. "Radio interferometry with the EVN has allowed us to spatially resolve the compact structure of the jet," says Robert Schulz, doctoral candidate at the Würzburg-Erlangen research cluster for astroparticle physics.

MAGIC – The "Major Atmospheric Gamma-ray Imaging Cherenkov" telescope system of the European Northern Observatory on Roque de los Muchachos, La Palma, Spain, features two telescopes, 17 metres in diameter each, which are capable of indirectly measuring cosmic gamma radiation in the energy spectrum of 25 giga-electronvolts up to 50 tera-electronvolts. The gamma radiation enters Earth's atmosphere where it triggers avalanches of secondary particles that cause blue Cherenkov light reaching down to the ground. MAGIC is an international collaboration of 160 researchers under the direction of the Max Planck Institute for Physics (Werner Heisenberg Institute) in Munich. Dr. Razmik Mirzoyan is the spokesman of the collaboration.

EVN – The European VLBI network is a joint facility of international radio astronomy institutes. The findings covered in this article are based among others on observations made with the Effelsberg 100-metre radio telescope operated by the Max Planck Institute for Radio Astronomy in Bonn.

Link to the network's homepage 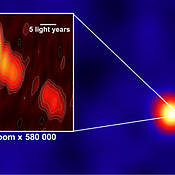 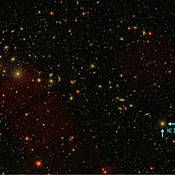