University of Würzburg physicists have modified silicon carbide crystals in a way that these exhibit new and surprising properties. This makes them interesting with regard to the design of high-performance computers or data transmission. 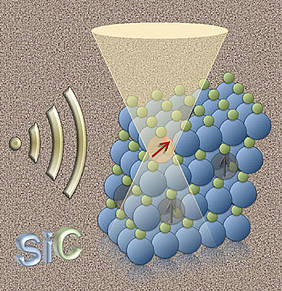 Silicon carbide crystals consist of a regular lattice formed by silicon and carbon atoms. At present, these semiconductors are extensively used in micro and opto-electronics. Together with scientists from Saint Petersburg, University of Würzburg physicists have now succeeded in manipulating silicon carbide in a way that the material is suited, among other things, to be used in novel, super-fast quantum computers.

A defect in the crystal

"We have removed a silicon atom from the crystal lattice, thus creating a silicon vacancy defect," Dr. Georgy Astakhov says, explaining the method applied by the physicists. Astakhov is a research fellow at the Department for Experimental Physics VI of the University of Würzburg.

To the researchers' surprise, this crystallographic defect gives the material interesting new properties. In order for the semiconductor to emit light – speaking in descriptive terms – its electrons must be raised to a higher energy level by means of energy-rich light, for instance. The silicon vacancy defect leads to the generation of additional energy levels in the so-called band gap.

Professor Vladimir Dyakonov, chair of the Department for Experimental Physics VI, explains the process with a simple analogy: "In a regular, perfectly structured silicon carbide crystal, the electron must overcome a big hurdle with only one step. This requires a lot of energy. Due to the defect, the electron is provided with a ladder. It can clear the hurdle with two steps, requiring less energy."

When the electrons "fall back" from the higher energy level to the lower one, this type of silicon carbide emits infrared rather than ultraviolet light. According to Astakhov, such light is better suited to transfer information in an optical fiber. "This requires wavelengths in the infrared range," the physicist says.

Application in a quantum computer

The modified silicon carbide is particularly promising for another application – as a semiconductor and storage medium in novel quantum computers. "Since their invention, transistors have shrunk from several tens of micrometers to approximately ten nanometers, i.e. about one thousandth of their original size," Astakhov notes. If the miniaturization continues at this speed, transistors would have to consist of one individual atom in ten years' time. At this scale, however, special physical laws apply, namely the laws of quantum mechanics.

The computers of today process information with the binary system (0/1): Electricity flows or it does not. A quantum computer processes information in the form of so-called qubits. These can be based on the spin of electrons. In simplified terms, the spin represents their angular momentum. It can point in several directions, for which reason it can represent much more information than a classical bit.

The information lies in the defect

"In this field of research, a lot of attention has been paid to the color centers in diamond, which exhibit defects that are similar to those of our silicon carbide," says Astakhov. Their qubits can be easily addressed, changed or read even at room temperature. However, the diamond production technology is not nearly as advanced as that of silicon semiconductors. "For this reason, there is a worldwide hunt for quantum systems that combine the advantages of diamond and silicon within one material," Astakhov explains.

The Würzburg physicists consider silicon carbide with a vacancy defect to be a suitable candidate for this purpose. "The missing atom also has as a consequence that the crystal lattice lacks an electron, which in turn is equivalent to the spin that can be used as information carrier in a quantum computer," Dyakonov explains. Furthermore, the silicon carbide technology is fairly well developed. Light emitting diodes, transistors, micro-electro-mechanical components or sensors made from this material are already on the market.

Exposing the material to light and radio waves

The Würzburg physicists conducted their experiments in collaboration with researchers from Saint Petersburg. By "hitting" the silicon crystals simultaneously with light and radio waves, they were able to manipulate the spins in a targeted way, enabling them to store and retrieve information at will.

What the physicists are particularly enthusiastic about: "It is remarkable that the silicon vacancy qubits in a densely packed crystal behave almost like atoms with well-defined, very sharp optical resonances. This is very unusual," Astakhov adds.

The researchers published their results in the journal "Physical Review Letters" at the end of 2012. "This is a new research field where experimental data of other study groups are still scarce at the moment. However, the reviewers looked favorably on our experiments and immediately recommended our manuscript for publication. We are very curious to know how the scientific community will react to our study," Astakhov reveals. The first reaction has already materialized: Astakhov has been invited to present his results at the Quantum Science Symposium in Cambridge.

Spin quantum computers not only require the ability to process information, but also to store the information for as long as possible. This is still a problem at this point, since the stray field of adjacent nuclei can gradually erase the information stored in the defects.

Therefore, the researchers from Würzburg and Saint Petersburg plan as a next step to produce silicon carbide crystals that are formed from a silicon isotope without a magnetic moment. "We know that spin-free isotopes of silicon and carbon atoms exist," says Astakhov. A silicon carbide crystal exclusively consisting of such isotopes should therefore be capable of storing the information over a long period of time.