Before pain is not the same as after pain

Stimuli that regularly appear in connection with unpleasant situations are rated by people as negative, as would be expected. However, as researchers from the University of Würzburg are now showing, these stimuli can also subconsciously be rated positively – depending on the chronology of events. 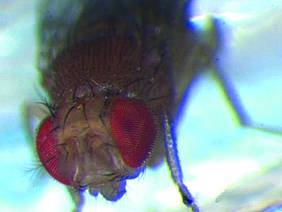 Why do people fall from bridges and tall buildings attached to long ropes? Why do they ride rollercoasters that hurl them forward and backward through five loops, even though the mere sight of them is enough to turn the stomach of most people? Answers to these questions might be supplied by a new study from the University of Würzburg. It was planned and conducted by psychologists and biologists from the university under the guidance of Paul Pauli, Chairman of the Department of Psychology I, and neurobiologist and outside lecturer Dr. Bertram Gerber from the Department of Neurobiology and Genetics. Their work is reported on in the renowned British journal Proceedings of the Royal Society B.

“With fruitflies, the matter is relatively simple,” says Bertram Gerber. This scientist has been studying the nervous system of fruitflies and their larvae at the Biocenter for some time now. Scent plays an important role here. “If a particular smell is presented to fruitflies and shortly afterward they are exposed to a painful electrical stimulus, they will avoid this smell in the future,” says Gerber. On the other hand, these insects will be attracted to an odor that is presented to them immediately after a painful event. “So, with fruitflies the conversion of punishment into reward comes down to timing. The moment of ‘relief’ works like a reward,” says the neurobiologist.

With people, it is not quite such a simple affair: “We were already aware that in the case of people a stimulus that regularly precedes an unpleasant event is soon perceived as the predictor for danger,” explains Paul Pauli. What was not known, however, was whether stimuli that follow a fright are also associated with a feeling of safety, in the same way as in flies. After all, human behavior is not quite as straightforward as that of a fly. For instance, in people there are at least two systems that work sometimes together and sometimes in opposition: one is impulsive and led by feelings and associations, and the other is controlled by the intellect and makes decisions based on knowledge and values.

The setup of the experiment

Pauli and his colleagues have now examined how these systems operate in the case of unpleasant experiences using 101 test subjects aged between 18 and 43.

“We formed three groups of participants and presented different geometrical shapes to them,” says Pauli to set the scene. One of the groups received a mild electrical stimulus in the forearm regularly before a particular shape flashed up, while the second group received it shortly after the shape appeared, and the third group – the control group – experienced both events at lengthy intervals.

For the subsequent test phase, the psychologists used a trick that one of the journal’s reviewers described as ingenious: there were no electrical stimuli this time, but instead an unpleasantly loud noise delivered in parallel to the geometrical shapes, automatically eliciting a startle response. The strength of this response was measured using the blink of an eyelid. The experiment participants also had to rate their response to the triangles, circles, and squares: from “very unpleasant” to “very pleasant” and from “calm” to “exciting”.

The outcome of the experiment

The outcome was unequivocal: “Regardless of whether the shape appeared shortly before or after the electrical stimulus, it received negative values from the test subjects after the training phase,” says Pauli. This suggests, at first glance, that time plays no role in humans, unlike in flies – at least as far as their spoken, explicit judgment is concerned.

But a more in-depth look reveals that there are other processes going on subconsciously: “In people who were shown the shape before the electrical stimulus, the startle response to the noise was more intense in the face of the shape. However, if the shape followed the pain, the response was less intense,” says Pauli. The psychologists believe it is not unreasonable to conclude that stimuli that are associated with the end of an unpleasant event are later perceived subconsciously (or “implicitly”, to use the language of the psychologists) as pleasant.

It would therefore seem that people possess two different rating systems, an explicit one that they are aware of and an implicit one that controls their behavior without their knowledge. What is interesting about this study is that these two systems do not always have to work in unity. It is highly feasible that problems in the interaction of the two systems might play a role in anxiety disorders and addictions or might explain why patients suffering from anxiety or addiction do things that they say they do not like doing.

But the suggestion that they could explain such paradoxical behavior as riding rollercoasters or bungee-jumping is merely “speculation” at this point.