The Varroa mite is capable of annihilating entire bee colonies. Until now, this has been attributed to viruses that are introduced into the hive by the mites. However, the parasites carry yet another danger to the bees as University of Würzburg researchers found out. 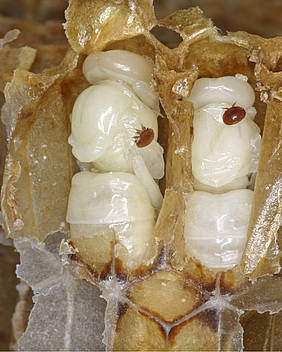 In the summer season, a hive includes up to 50,000 workers, several hundred drones and one queen, living in very close surroundings in a warm and humid atmosphere, which is also conducive to the growth of pathogenic bacteria. This might lead you to believe that infections spread easily in a bee hive.

However, the bees are well protected against this risk. Firstly, they set great store on hive hygiene. Furthermore, young workers, drones and queens react to bacterial infections with several defense mechanisms of their innate immune system. Bee larvae are also capable of defending themselves effectively against bacteria. All this has been demonstrated in recent years by the Beegroup of Professor Jürgen Tautz at the Biocenter of the University of Würzburg.

Still, the insects are defenseless at a certain stage of their development: After pupation of the larvae, their immune system stays completely inactive. This is reported in the journal PLOS ONE by the Würzburg scientists. When bee pupae were exposed to "harmless" Escherichia coli bacteria, this led to their death within only a few hours of infection. "The bacteria proliferated rapidly in the pupae, which apparently caused the death of the latter," says Professor Hildburg Beier, a member of the Beegroup.

In an intact bee hive, the pupae are usually well protected from bacterial infection. They develop in sealed brood combs, which are largely sterile. This is why the insects omit to protect themselves with immune reactions at this life stage. "This is biologically reasonable, because anything else would be quite a waste of energy and material," says Beier. After all, the developmental processes taking place in the cocoon are demanding enough.

The lack of immune responses during the time of pupation might spell doom for the European honey bees. This is due to the Varroa mite (Varroa destructor), a parasite that was introduced from Asia about three decades ago. "The mite is capable of wiping out entire bee colonies, because it transfers pathogenic viruses to the adult insects – as suggested previously," explains Professor Tautz, who is a beekeeper himself.

However, it is now conceivable that the mites pose a danger to the bees in yet another way: The female parasites penetrate into the brood cells and suck at the pupae. It cannot be excluded that they thereby transfer otherwise quite harmless bacteria to the pupae. This would certainly prove fatal to the pupae as the recent experiments of the Beegroup have shown.

Careful control of the parasites necessary

According to the researchers, there is reason to fear that the Varroa mite poses a far greater threat to bees than previously thought. Therefore, we are faced with the permanent and increasingly demanding task to ensure a careful and comprehensive control of this parasite in order to protect our honey bee populations.

Go to the article in PLOS ONE