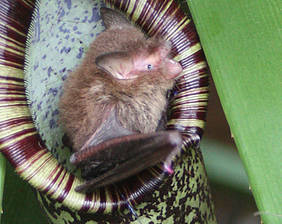 In pitcher plants, some of the leaves have evolved into tube-shaped traps. Their smooth interior walls provide unsure footing for insects and other small animals, which easily slip and tumble down – directly into a pool of digestive fluid, where the hapless animals are dissolved and valuable nitrogen is released from their bodies. The nitrogen is then absorbed into the plant's tissue. Nitrogen is a vital nutrient for plants; among other things, it is essential as a component for the synthesis of chlorophyll.

Bat feces as a source of nitrogen

The pitcher plant Nepenthes rafflesiana, which grows in the rain forest on the island of Borneo in Southeast Asia, pursues a different nutrient-acquisition strategy: It does not rely on the carcasses of trapped animals to supplement its nitrogen intake. Instead, it uses the feces of Hardwicke's woolly bat, which consistently retires for sleep to the spacious pitchers of this plant, dropping its feces into the digestive liquid.

This relationship is of benefit to both partners: The plant offers the bat exclusive access to a safe roost and gets nutrient-rich fecal matter in return. The scientists estimate that about 34 percent of the plant's foliar nitrogen is derived from bat feces.

The pitchers of the Southeast Asian Nepenthes species are up to 25 centimeters in length with diameters ranging between four and five centimeters. The small woolly bat only has a length of three to six centimeters. Usually, the pitchers are occupied by one single animal, but sometimes mothers share a pitcher with their baby.

"This is a very unusual example of a partnership between plants and animals," says Ulmar Grafe of the Department of Zoology III (Animal Ecology and Tropical Biology) at the University of Würzburg. So far, no other pitcher plant species has been found to get its nutrients from bat feces. There is only one other documented case to date of a partnership between a carnivorous plant and an animal: The pitcher plant Nepenthes lowii attracts tree shrews by inviting them to drink from its nectar. In order to do this, the animals sit on the pitcher, which they also use as a toilet when the occasion arises.

The exotic relationship between the woolly bat Kerivoula hardwickii and the pitcher plant Nepenthes rafflesiana has been discovered by Grafe together with the Würzburg biology students Michael and Caroline Schöner. The study also involved researchers from the University of Brunei Darussalam and the University of Greifswald.

Co-evolution of bats and pitcher plants?

At first sight, the pitcher plant does not seem to be dependent on the feces of the bats – after all, it traps insects, though not very many: "The pitchers of Nepenthes rafflesiana are pretty poor traps," Grafe explains. Compared with other carnivorous plant species, they produce very low amounts of digestive fluid and they exude hardly any insect-attracting scents.

The Würzburg researchers are going to examine such indications of a possible co-evolution between bats and pitcher plants in further detail. "Presumably, the bats first visited the pitchers – as an expedient measure, since safe roosts are limited in the rain forest," Grafe explains. Due to the feces of the animals, the plants might have been less dependent on trapping insects. This could explain the reduced production of scents and digestive liquid.

Progress of the research

Next, the biologists are going to examine how the bats are able to find appropriate pitchers to sleep in among all the plants in the dense undergrowth of the rain forest. What they would also like to know is whether there are other Nepenthes species that are specialized in recycling the feces of these small mammals. 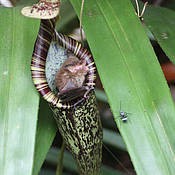