Healing cartilage defects: This is the objective of a new international research network. Implants that are structured like natural tissue are to provide durable repair of defects in the joint. The project, which is coordinated at the University of Würzburg, is funded by the EU with almost ten million euros. 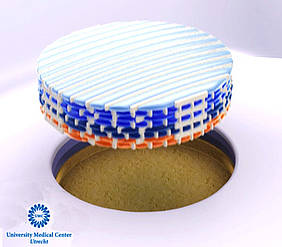 When Jürgen Groll enumerates the properties of cartilage, you can hear the admiration in his voice. "Cartilage is quite the high-tech composite," he says. What looks like a uniform whitish substance to the uninitiated eye, turns out to be a sophisticated layered system of diverse structure on closer inspection. "For instance, the collagen fibers in the cartilage layer resting against the bone are arranged perpendicularly, thus providing a sturdy connection," Groll explains. In higher layers, in contrast, the fibers are oriented crosswise so that they are ideally suited to absorb shear forces.

Cartilage: quite a special material

Deeper layers are similar to a gel with a high negative charge. As a consequence, the cartilage attracts water on a massive scale. When the tissue is put under pressure, e.g. stress on the knee induced by jogging, the water is released from the tissue. In this way, the cartilage absorbs the shock. When the pressure decreases, the water returns automatically.

Groll has a particular fascination for the properties of the cartilage surface. In order to ensure that movements are carried out in a literal sense with as little friction as possible, the cartilage is "slippery to a degree that cannot be technologically achieved," he says. In this area, the coefficient of friction reaches a value "similar to water on ice".

In short: "There is no other material that has the same properties as cartilage," says Groll. Jürgen Groll has been Chair of the Department for Functional Materials in Medicine and Dentistry at the University of Würzburg since August 2010. He conducts research on new materials with a view to future application in patients. Since the start of this year, he has been coordinating a new European research network centering on cartilage tissue.

"HydroZONES": This is the name of the research network. Apart from the University and the University Hospital of Würzburg, the network includes research institutions and companies from Heidelberg, Dresden, Aachen, Munich, Oxford, Utrecht, Groningen, Pamplona and the Portuguese city of Leiria. Even an Australian team is involved.  The EU is going to fund the work of the researchers with € 9.75 million over the coming five years. Slightly more than two million euros will go to Würzburg.

Cartilage damage is a major cause of chronic pain, decreased mobility and a reduced quality of life. Osteoarthritis is the most common joint disease. It is estimated that more than 151 million people are affected worldwide; in Germany, more than five million people suffer from the disease. It can be caused by sport accidents, but can also result from normal wear and tear due to aging. It often starts with a small defect, which grows over time, because the body is not capable of regenerating the cartilage tissue on its own. When large areas of the cartilage layer are destroyed, a surgical intervention is usually unavoidable. In severe cases, the use of an artificial joint is the only option.

This might change if the research network achieves its objective. "Our work is based on the hypothesis that specially constructed implants can be used to stimulate the body into closing cartilage defects with native tissue," Groll explains. The trick: The scientists are going to develop implants that correspond with their layered structure to nature's original design as accurately as possible.

Regenerate rather than repair

Several layers of a hydrogel, stabilizing layers of synthetic tissue and messenger substances attracting special cells or simply the relevant cells themselves: This is how the cartilage replacement might be constructed. The task of the implant is to stimulate growth in the native tissue: The motto is "Regenerate rather than repair" as Groll puts it. Since cartilage lacks the ability to do this on its own, it needs to be assisted. The implant itself is expected to be removed by the body over time to the extent that it can be replaced by newly developed native cartilage.

To be sure, even today, there are already implants available that can be used by medical professionals to restore defective cartilage. However, these implants are not capable of standing comparison with natural articular cartilage in all its aspects. Furthermore, the replacement tissue induced by the materials currently in clinical use is not able to withstand the application conditions for long when used in highly stressed areas, such as the knee. The scientists involved in the research network consider the reason for this obvious: Since these implants are not structured in layers like natural cartilage, they are not able to induce the formation of real cartilage tissue.

Production in a printer

The technology for producing the implants is based on a simple principle: Like in an inkjet printer, small bio-factories build up the artificial cartilage structures layer by layer. The difference is that the printing nozzles contain – depending on the layer being deposited – hydrogels of various densities, growth factors, hormones, cartilage-producing cells, also known as chondrocytes, et cetera rather than ink. The whole process is envisioned to proceed fully automatically and, of course, under sterile conditions.

"It sounds easy enough, but represents a big interdisciplinary challenge because of the desired automation and the absolute requirement of sterile conditions," says Jürgen Groll. This is part of the reason for the large size of our research network, including as many as 17 partners, some of which divide into several teams. "Such a challenge can only be met with a large European consortium bringing together many experts from various disciplines," Groll notes.

Würzburg is involved in the project with both the University and the University Hospital. Jürgen Groll is the expert on the carrier material. He is familiar with hydrogels, synthetic tissues and their properties. Heike Walles, Professor and Chair of the Department for Tissue Engineering and Regenerative Medicine, has years of experience in the automated production of biomaterials. She has been growing liver, skin and other tissues in her laboratory for quite some time now. Thorsten Blunk has held the Professorship of Experimental Trauma Surgery at the University Hospital of Würzburg for a good three years now. Tissue engineering of cartilage tissues is one of his research topics. Professor Maximilian Rudert, Chair of the Department for Orthopedics and Head of the Orthopedic Clinic "König-Ludwig-Haus", and Professor Ulrich Nöth, Head of the Department for Experimental Orthopedics at the König-Ludwig Haus, attend to the project with a clinical perspective. Both of them place particular importance on the application orientation of the research and on the close contact with patients.

"If everything goes smoothly, we will have a tissue construct ready for clinical trials in five years' time," Jürgen Groll describes the objective of the research network. The researcher estimates that it will take at least another five years until an implant is available that can actually be applied in a patient in clinical practice if no problems occur in the clinical trials. However, the work will not be in vain even if this ambitious objective is not achieved. The researchers have divided their project into several work steps with progressing degree of complexity. "This is why there will definitely be some improvements on the procedure existing today," Groll states with certainty. How far these improvements will take us remains to be seen over the coming years.