How does the absolute or relative size of the brain or of particular brain centers influence behavior? Researchers at the University of Würzburg’s Biocenter studied this question in leaf-cutting ants and obtained surprising results. 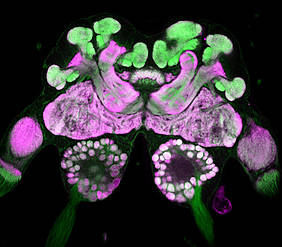 In the science magazine "Proceedings of the Royal Society B", Professor Wolfgang Rössler and his colleagues report that the volume analyses commonly used so far provide very limited informative value regarding brain capacities. "Our results show that volume measurements alone – both absolute and relative – provide insufficient informative value for comparing brain capacities. This is true for both intraspecies and interspecies comparison and even for different parts of the brain," says the head of the Department of Behavioral Physiology and Sociobiology at the University of Würzburg.

The reason is relatively simple: "Synaptic densities can be similar, or they can differ greatly," Rössler explains. Behavioral neurosciences include a special discipline dedicated to studying the brain size differences between very large and very small members of one species or between different species: brain allometry. Here, scientists investigate, among other things, to what extent the increased volume of specific brain regions in relation to the whole brain is automatically associated with enhanced learning aptitude or intelligence – in humans, for example, the hippocampus or frontal lobe in relation to the whole brain.

Size-dependent division of labor in ant societies used as model

Like most social insects, leaf-cutting ants are capable of labor division. Different individuals of one colony perform different functions. In nests comprising several million individuals, this is crucial to ensure efficient logistics and ultimately the survival of the species. In the case of leaf-cutting ants, it is particular interesting that the members of the individual "teams" exhibit an enormous size polymorphism depending on their function.

Tiny "mini workers" cultivate fungus in the subterranean nest to feed the ant larvae. Other workers have an up to 200-fold increased body weight. They leave the nest for long forages and bring back the leaves which are used as substrate for the fungus. Both activities are complex and require highly developed learning and memory capacities.

The so-called mushroom bodies in the insects' brain are responsible for this. The mushroom body's olfactory subdivisions are particularly important for the leaf-cutting ants in this context. "How is it possible that the mini workers' much smaller brains are capable of performing equally complex functions?" asks Claudia Groh of the Department of Behavioral Physiology and Sociobiology at the University of Würzburg.

Synaptic density as a limit for brain miniaturization

Leaf-cutting ants thus provide ideal model systems for core questions of brain allometry. Using molecular markers and high-resolution laser scanning confocal microscopy, the researchers performed detailed analyses of the tiny brains at the level of the synapses, which transmit signals from one nerve cell to another. The number of synapses is indicative of a brain region's capacity.

The analyses revealed that the synaptic density within the species is surprisingly constant and thus independent of the body size. "From this follows that mini workers only have one third of synapses compared to large workers, despite the fact that their mushroom bodies are larger in relation to the whole brain," says Wolfgang Rössler. The mini worker's brain miniaturization is thus limited by the species-specific synaptic density in the mushroom bodies.

"Since mini workers are inside the nest most of the time, they are exposed to fewer olfactory stimuli than the foragers. So the disadvantage of a reduced synapse count in the olfactory centers is probably less significant," Rössler says and adds: "Our work sends a clear signal that goes beyond the ant world. The results show that volume measurements and comparisons alone provide very limited informative value to assess the capacities of brains."