Ants: Flexible in Tending the Brood

Ants subjected to cool temperatures during their pupal stage differ in tending the brood when compared with fellow workers more generously provided with warmth. It is not only the genes, but also the conditions experienced during individual development that account for flexible behavior. 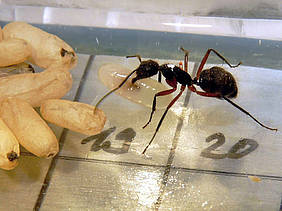 Genes are not everything: Even simple parameters, such as temperature conditions, influence the behavior of social insects in the long term. This insight has been published in the journal Current Biology by a research group at the Biocenter of the University of Würzburg. The new findings are the result of experiments with the South American ant species Camponotus rufipes.

The ant species Camponotus rufipes raises its offspring in above-ground nests in various brood chambers. The optimum temperature for the development of these animals is about 30 °C. Higher temperatures are detrimental and may even prove lethal to the brood.

In the nest, however, the temperatures fluctuate in daily and seasonal cycles. Therefore, these ants always carry their offspring to the brood chambers providing the best-suited temperature conditions.

Response threshold is not genetically determined

At which temperatures do the ants start to relocate the brood, i.e. what is their response threshold? “The response threshold is not genetically determined,” says Würzburg zoologist Anja Weidenmüller. “Instead, it is clearly dependent on the temperature to which the animals were subjected during pupation.”

The Würzburg zoologist raised two groups of ant pupae, of which one was kept at 22 °C and the other at 32 °C. All of the emerged ant workers then lived in artificial nests at 25 °C, where they performed brood care.

Four weeks after emergence of the adult ants, the researchers raised the temperature of a brood chamber. As a response to this manipulation, the group that had been kept cool during pupation started significantly earlier to take the offspring to safety. Furthermore, this group usually completed the evacuation of offspring from the endangered brood chamber more quickly, while the animals raised at 32 °C took more time for this task.

Ecological purpose of this behavior

A wide range of behavioral responses in ant workers is beneficial to the colony. This has been shown by several study groups in recent years. Individual differences between the ant workers are a basic requirement for the division of labor, which is one of the main factors responsible for the great ecological success of social insects.

But it is still largely unclear how the differences between ant workers are brought about. “So far, scientists have primarily presented genetic causes,” says Anja Weidenmüller. For instance, the queen of a bee colony mates with up to 30 males. Furthermore, the genetic recombination rates of social insects in the production of egg and sperm cells are much higher than those of other insects. Both factors increase the genetic diversity and thus expand the range of behavioral responses in the colony.

“But now we have shown for the first time that the conditions experienced during the individual development of the ants can also modulate their behavior in the long term and we understand in which way this can be beneficial to the social organization of the colony.”

Seasonal change provides a further reason for the fact that the response thresholds are influenced by developmental temperature conditions. In spring-time, the nests are often too cold. Therefore, it makes sense for ants that have emerged from such conditions to start transferring the brood to warmer places even at relatively low temperatures.

In contrast, the nest is subjected to high temperatures in summer. In this case, the response threshold of the ants is higher, because otherwise a disproportionate amount of time and energy would have to be invested in continual brood relocation.

The Würzburg researchers conducted further experiments on ant workers kept at the same temperature during pupation. The adult ants of this group were subjected to a temperature increase in a brood chamber five times in a row. The result: With each experiment, the group grew more efficient in emptying the brood chamber.

“The individual ants became ever faster in evacuating the brood while the temperature at which they picked up the first pupa remained constant. So the response threshold did not change,” explains Anja Weidenmüller. This means: “The ants do not grow more sensitive to higher temperatures, but they learn to react more adequately.”

Conclusion: Through these mechanisms, the ant colony is never in lack of workers best suited in their response to changing temperatures in each case. In comparison, a genetically determined fixed temperature response threshold would represent a less effective solution.