Stiff person syndrome: this is the name given to a rare disorder of the central nervous system whose causes still puzzle scientists. A research team from the Department of Neurology at the University of Würzburg (Germany) has now made a new discovery about this disease. 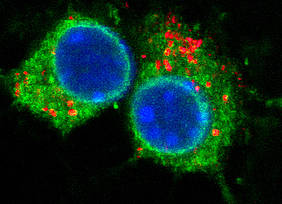 With stiff person syndrome, all the muscles of the body become stiff, in the form of attacks at first, then later constantly. Agoraphobia and extreme nervousness are also symptoms. If the disease is fully developed, the sufferer can neither walk nor stand and is then confined to a wheelchair.

The root of the syndrome is an immune disorder of the central nervous system: specific antibodies purposefully attack a protein in the brain and spinal cord. Normally, antibodies fend off harmful intruders, such as bacteria or viruses. However, they can also make the mistake of turning against the body itself, as happens with stiff person syndrome. Medical experts refer to this as an autoimmune disease.

With stiff person syndrome, the misguided antibodies attack the protein amphiphysin, which plays an important role in enabling the control points between nerve cells and also between nerves and muscles to work properly. According to the prevailing opinion in science, this protein is found inside the cells – and therefore should not actually be accessible to antibodies.

However, the Würzburg researchers have provided clear evidence that the antibodies isolated from patients are able to reach their target molecule inside the cells and specifically bond with it. Via intermediate steps in the cell cycle they then cause a reduced release of the transmitter GABA, which inhibits the activity of the nerve cells. In the animal model, this leads to the typical symptoms of stiff person syndrome, such as muscle spasms, stiffness, and muscle cramps.

Publication in the journal Brain

Claudia Sommer, Christian Geis, and Klaus V. Toyka from the Department of Neurology present their new findings in the current issue of the renowned journal Brain. The publication came about in collaboration with Manfred Heckmann, head of the Würzburg Institute of Physiology. The German Research Foundation (DFG) funded the work in Collaborative Research Center 581 “Molecular Models for Diseases of the Nervous System”.

“We have proven using several techniques that the antibodies reach their goal,” says Claudia Sommer. The hidden paths the antibodies take to get there remain a mystery that the scientists are now looking to solve.

If it proves possible to influence the activity of the antibodies with medication, for example, new possibilities in therapy might present themselves. This applies not only to stiff person syndrome, but also to other areas: “Antibodies also play a role in diseases that have other additional causes,” says Christian Geis. He cites, as an example, Neuromyelitis optica, a disease in which the antibody directs its destructive work against the spinal cord and optic nerves.

Stiff person syndrome is regarded as a rare disease. It affects an average of one person in every million. The Würzburg Department of Neurology has a total of ten patients in its care.

One way of relieving the symptoms of sufferers is with dialysis because this temporarily removes the harmful antibodies from the blood. The effect does not last though, since new antibodies continue to be produced by the B cells of the immune system. However, the B cells can also be attacked: with medication that inhibits their activity. “The method is relatively new and is working very well in a few patients,” comments Claudia Sommer.