Malformed ion channels can be the cause of motor disorders. Scientists from Würzburg and Cambridge have now discovered how these channels manage to pass cellular quality control despite being folded abnormally. Their findings have refuted an old dogma. 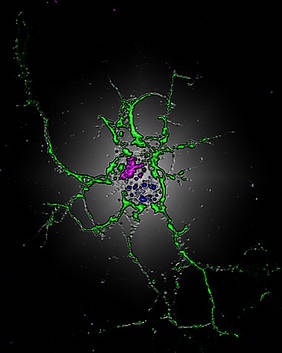 Most people take activities like walking, running, jogging, but also breathing and swallowing for granted as processes that happen automatically in our body. But there are a number of diseases in which these processes are disturbed and can no longer take place automatically. Professor Carmen Villmann, a Würzburg neurobiologist, is investigating the causes behind one of these disorders, the so-called "startle disease". She has recently identified mechanisms in the synthesis process of specific receptors as potential culprits. The Journal of Neuroscience has put this discovery on its front page.

"Allegedly simple processes such as walking or breathing are based on a number of signal processes and regulation and control mechanisms," Carmen Villmann explains. Environmental stimuli like touch or noise travel to the spinal cord and brainstem where they are processed. The muscles then receive the contraction frequency from the brain in a sequence that enables seemingly automatic movements and controls the breathing rhythm, for example.

Equilibrium between excitation and inhibition

"When signals are forwarded from the spinal cord to the muscles, excitation and inhibition processes have to be balanced in order to enable controlled movements," Villmann further. This process may be impaired by excessive excitation or missing inhibition. Such a motor disorder is also known as "startle disease" in medical lingo. The inhibitory signal transmission is impaired in persons affected by the disorder resulting in excessive excitation and stiffness of muscles.

"We have known for quite some time that glycine receptors in the spinal cord mediate this inhibition process," the neurobiologist explains. These receptor proteins form pores in the membrane of neurons and only allow negatively charged chloride ions to pass. Failure of such a receptor causes a disequilibrium between excitation and inhibition in favour of excitation and muscles get cramped as a result.

No all-or-none response in cells

The "startle disease" is hereditary and is caused by genetic defects. "Until recently, scientists believed a cellular all-or-none response to be responsible for the startle disease," Villmann states. This means that dominant mutations in the glycine receptors, which are nearly all located in the ion channel pore, were transported normally, but are associated with impaired channel conductivity because of their dominance. Due to their localisation inside the protein, recessive mutations cause the protein that is being synthesised to be folded abnormally; they are sorted out during synthesis. In collaboration with scientists from Cambridge, Carmen Villmann and her team have now asserted that this all-or-none assumption is not correct.

Before the cell can integrate a new receptor molecule into its membrane, this protein has to pass through several constituents of the cell during its synthesis process, similar to a product undergoing multiple processing steps on different machines. For example, the endoplasmic reticulum, the ER-Golgi intermediary compartment (ERGIC) and the secretory system of the different Golgi apparatuses are all involved in protein synthesis. If proteins are misfolded due to mutations, the quality control system in the endoplasmic reticulum prevents these proteins from travelling further.

For their study the researchers first examined newly identified mutations of patients in cell culture systems. "We discovered that a small portion of the mutated receptors does in fact reach the cell membrane, but does not generate a functioning channel pore," Villmann says. Since such effects may also be triggered by the overproduction of proteins in artificial cell culture systems, the researchers subsequently investigated the mutated channel proteins in systems that result only in a low expression of the channel protein as well as in neurons. "But the effects we observed were still the same: Subpopulations reach the cell membrane, but their number is too small to keep up the receptor's actual function," Villmann points out. A look into the cellular compartments allows each mutated channel protein to be tracked exactly: Some get as far as the Golgi apparatus and further on to the cell membrane, others only reach the ERGIC compartment and are found neither in the Golgi apparatus nor in the membrane.

This observation has led the research team to the following conclusion: "The mutation of a single of around 500 amino acids in the receptor does not necessarily have to result in the protein's massive misfolding which blocks the passage from the endoplasmic reticulum," Carmen Villmann explains. This interpretation is backed by the fact that all mutated receptors were marked by sugar molecules which is the prerequisite for being transported out of the endoplasmic reticulum.

There have to be other control mechanisms

Still, only a few mutated receptors manage to bypass the cellular quality checkpoints and reach the neuronal membrane, the final destination. "So there have to be additional control mechanisms in the subsequent compartments," Villmann assumes. Whether the proteins travel back to the endoplasmic reticulum or are directly singled out for degradation by compartments such as ERGIC and the Golgi apparatus remains yet to be answered. The group of Carmen Villmann aims to explore the depths of this cellular microcosm even further to study the signal pathways in this rare hereditary disease.

The research was funded by Deutsche Forschungsgemeinschaft DFG and by the EU project Neurocypres.