Due to inflammations, blood vessels may become leaky: Blood plasma leaks into the tissue which might involve serious complications. Researchers from the University of Würzburg have now developed a kind of molecular adhesive sealing hyperpermeable blood vessels. 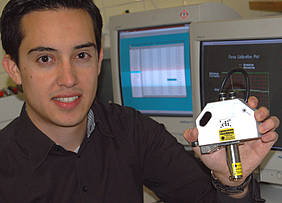 Inside, blood vessels are lined with a single layer of cells. On their surface, these cells bear specific adhesive proteins by means of which they stick close to each other. Normally, this ensures a perfect sealing of the blood vessels.

The most important adhesive protein is the so-called VE-cadherin. It can be destabilized due to different pathological conditions, e.g. due to a sepsis when bacteria have penetrated into the bloodstream and spread within the whole body. This infection causes inflammatory processes which involve leaks in the blood vessel lining. Blood plasma leaks which might result in life-threatening organ swellings as well as tissue bleeding.

To date, there is no means to seal hyperpermeable blood vessels. However, this would be very helpful e.g. for treating patients with pulmonary edema or allergy-induced organ swelling.

Here, researchers from the "Institut für Anatomie und Zellbiologie" (Institute of Anatomy and Cell Biology) of the University of Würzburg succeeded in taking a first step forward: They have developed small peptide molecules which increase adhesion between vital VE-cadherin adhesive proteins. Thus, the vascular lining is stabilized against inflammatory stimuli.

How do the peptide molecules work? They work just like an adhesive: They bridge the adhesive proteins with each other, because they are designed following the example of the structure by means of which the VE-cadherins stick close to each other. They have a crosslinking effect which they deploy as tandem peptides arranged one after the other – similar to a medical strip with two adhesive ends.

Still far away from application in humans

"These results offer new approaches for the treatment of vascular hyperpermeability", says Prof. Detlev Drenckhahn. However, it is still a long way to go until an application in humans is possible, because the current structure of the molecules is not suitable for such an application.

According to Prof. Drenckhahn it is always difficult to apply peptides to humans, because an unexpected immune response is possible. The next step for the researchers from Würzburg now is to find other molecules resembling the peptides in structure and effect.

Publication in the Journal of Cell Science

The leading researchers from Würzburg Wolfgang-Moritz Heupel, Jens Waschke and Detlev Drenckhahn describe their new approach in the current issue of the Journal of Cell Science. They have worked together with the structural biologist Thomas Müller from the Biocenter who has developed the peptide molecules on the computer. The peptide molecules have been tested in different systems together with the chemist Athina Hübner, the medical scientist Nicolas Schlegel and other employees of the "Institut für Anatomie und Zellbiologie" (Institute of Anatomy and Cell Biology).

The efficiency of the novel molecules could be shown for isolated VE-cadherin adhesive proteins as well as in vivo by means of atomic force microscopy (AFM): If the protective "adhesive" is injected into the blood vessels of mice, their vascular lining does not break down when being exposed to an experimentally generated inflammatory stimulus.

The tandem peptide (shown in the middle) developed at the University of Würzburg "adheres" one sequence of the VE-cadherin adhesive protein to another. Thus, it seals blood vessels which have become permeable. Figure: Wolfgang-Moritz Heupel