Calcium controls the beating of the heart and is a trigger for heart growth. But how does the heart know when to beat at a faster rate and when to start growing? Researchers have now found an answer to this question. Oliver Ritter, medical scientist at the University of Würzburg, was also involved in the studies. 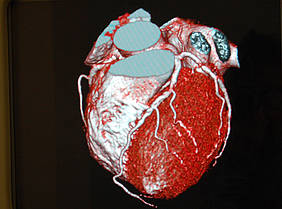 The heart: In a healthy adult, it beats about 70 times a minute at rest. This value can more than double when the heart is subjected to stress. Under normal conditions, it pumps three to five liters of blood per minute through the circulation whereas in trained athletes the flow rate can reach up to 30 liters per minute. After a heart attack or if the respective person suffers from hypertension, the heart grows, trying to compensate for an oxygen deficiency – medical scientists call this phenomenon hypertrophy. In all these processes, one substance always plays a major role: calcium.

How does the heart know in which case calcium conveys a growth signal and in which case it carries the request: “Quicken your beat, will you”? Scientists have been searching for answers to this question for a long time. In two recently published studies, researchers at Cambridge and Oxford universities – in teamwork with the Würzburg scientist Oliver Ritter – have now succeeded in providing some further clarification concerning the regulation and role of calcium in the heart. Ritter works as a senior physician at the Department of Medicine I of the University Hospital of Würzburg; he is in charge of a study group focusing on signaling processes in cases of cardiac insufficiency.

From previous research, it is known that a certain receptor – the InsP3 receptor – fulfills an important function in determining the different effects of calcium. It is located on the nuclear membranes of the cardiomyocytes, the muscle cells of the heart. If activated by growth signals, this receptor causes the calcium concentration inside the nucleus to increase, which in turn triggers a sequence of processes resulting in an activation of certain genes that control the growth of the heart. If the heart is subjected to a long-term increase in workload, the number of these receptors rises. “In this way, the calcium-dependent regulation of gene activity in case of hypertrophy can be de-coupled from calcium-controlled muscle contraction,” explains Oliver Ritter.

The role of the sarcoplasmic reticulum

In a subsequent study, the scientists were able to show that the rise in receptor quantity under stress conditions is not restricted to the nuclear membrane. The same effect was observed on the membrane of the so-called sarcoplasmic reticulum (SR) – a special type of endoplasmic reticulum, which is a component of almost all body cells. In muscle cells, the SR stores calcium ions. On electrical stimulation, it releases these ions, triggering a contraction of the muscle fibers. When there is no longer any input of electrical impulses at the muscle fiber, the calcium ions are pumped back into the SR. This stops the contraction. In this way, the sarcoplasmic reticulum controls the muscle contraction.

One type of receptor affects the other

“In the membranes of the sarcoplasmic reticulum, however, these receptors are present in significantly lower quantities than a second type of receptor – the so-called ryanodine receptor – which is traditionally known to be responsible for calcium release from the SR,” says Ritter. The study group of Cambridge, Oxford and Würzburg scientists has now established that under stress conditions the InsP3 receptors affect the ryanodine receptors. With fatal consequences: “The sarcoplasmic reticulum suffers a permanent loss of calcium. This weakens the muscle contraction because the reticulum has now less calcium in store while the susceptibility of the heart to dangerous arrhythmias increases,” explains Ritter. This is a risk, which is also associated to people with cardiac hypertrophy.

According to Ritter, these new findings offer the chance to develop new substances that fight against cardiac hypertrophy or prevent arrhythmias.