A quantum leap for information processing

The physical laws governing the world of atoms and electrons are different from those applicable to macroscopic phenomena. Scientists intend to make use of these laws, e.g. to develop new methods of storing and exchanging information. The necessary material for this is provided by Würzburg physicists. 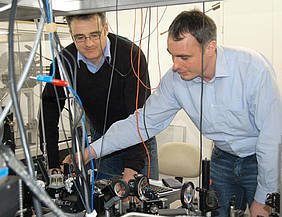 At the scale of atoms and molecules, a peculiar world unfolds: Matter assumes the characteristics of waves, whereas light, known by laypeople as electromagnetic radiation, becomes a product of elementary particles, the so-called photons. Physical properties only exist in fixed units; there are no intermediate stages.

Such is the world of quantum mechanics. This fundamental physical theory, towards the establishment of which the Würzburg-born scientist Werner Heisenberg made a significant contribution, describes the laws of the microcosm and it still causes bafflement with some of the effects it predicts.

Physicists intend to harness these quantum effects, among other things, for future use in information processing. A new research network with international participation aims at setting the groundwork for this purpose. The Department of Engineering Physics at the University of Würzburg is also involved in the project. The EU funds this project with around 2.2 million euros over the next three years.

"Modern computers are continually gaining processing capacity while forever getting smaller and smaller. However, the smaller the structures, the more relevant the quantum mechanical laws," explains Sven Höfling. The physicist is group leader at the Department of Engineering Physics of the University of Würzburg. Together with Professor Lukas Worschech, who is head of the department, he is responsible for the Würzburg contribution to the research network.

"Since the miniaturization of electronic components is already approaching quantum-relevant dimensions, it makes sense to use the laws of quantum mechanics for a new form of information processing," Höfling continues.

"The PC of today processes information in a purely digital format. This means: It can only differentiate between the states 1 and 0, which are represented by "current flow" or "no current flow" respectively, explains Lukas Worschech. Quantum mechanics offers a whole lot of new possibilities: "At the atomic level, data can be connected with states that are mutually correlated," Worschech says.

It is also possible to pack several units of information into one quantum state and to process them separately from each other. In this case, the number of conceivable mixed states is theoretically infinite, thus offering a multitude of possibilities for processing information. The respective field of research is called "quantum information processing".

If you want to understand the principle, you must first clear your mind of macroscopic concepts. This allows you to conceive of electron states where the particle is in several states at the same time. This so-called superposition is used by quantum computers. Conventional computers store their information in sequences, which are read out and processed consecutively.

A quantum computer can do better: It produces a superposition of states. While a classical bit assumes exactly one of two states, the quantum bit can be in both states at the same time before a measurement is performed. Because each change instantly influences the states of the total system simultaneously, the quantum computer works like a gigantic parallel computer, thus achieving previously unmatched processing capacity.

Information packets in the quantum world

For the design of their quantum computers, the physicists pin their hopes on particles of light, the so-called photons, rather than using electrons. "Photons are ideal quantum mechanical information carriers," Sven Höfling says. The informational content of the particles is subject to next to no noise and the particles move at the speed of light; furthermore, they can be easily manipulated and registered.

Data transport with single photons is already possible today. "However, this requires very large measurement systems in the laboratory," Höfling says. At this point, the new research network comes in: "It is our objective to fit this technology – for which a whole laboratory is required at present – into one single small chip," the physicist says.

Artificial atoms, created by the Würzburg researchers in their clean rooms in the microstructure laboratory, serve as the photon source. The transport of the photons is conducted via tiny waveguides, at the end of which they are measured by integrated detectors.

A quantum leap in the development of new computers

"If we succeed in integrating all functions within the scale of a single microchip, this will represent the proverbial quantum leap for information processing in the development of new computers," Höfling says. The intended paradigm shift can be roughly compared to the shift from tube-based to transistor-based machines in the early days of computers – i.e. from large computers that filled up entire halls to the PC, which can be accommodated on any work desk.

This miniaturization and the resulting integration of multiple functions led to the wide-spread use of classical information processing by the general public. "Similar user-friendly platforms have yet to be found for quantum information processing. The envisioned microchip is an important step in this direction," Höfling explains.

The research network "Quantip" now has three years to develop its quantum chip. The participating research facilities certainly have the experience and know-how required for this task. Does Höfling believe in the success of the project? "I feel confident of it," he says. To be sure: All participants are aware of the difficulties they are facing with their project. "But this is often the case in applied physics: When a problem occurs, new approaches will be taken so that the solutions look different than originally intended," says Höfling, "but such solutions can often be found." If things work out this way in our project, this would really mean a "great breakthrough".

"Quantip - Quantum Integrated Photonics" is the official name of the research network. The network is coordinated by Mark Thompson of the University of Bristol. The further participants include research facilities and universities in Australia, Germany, France, Italy and the Netherlands.