A New Type of Laser

University of Würzburg physicists have succeeded in creating a new type of laser. Its operation principle is completely different from conventional devices, which opens up the possibility of a significantly reduced energy input requirement. The researchers report their work in the current issue of Nature. 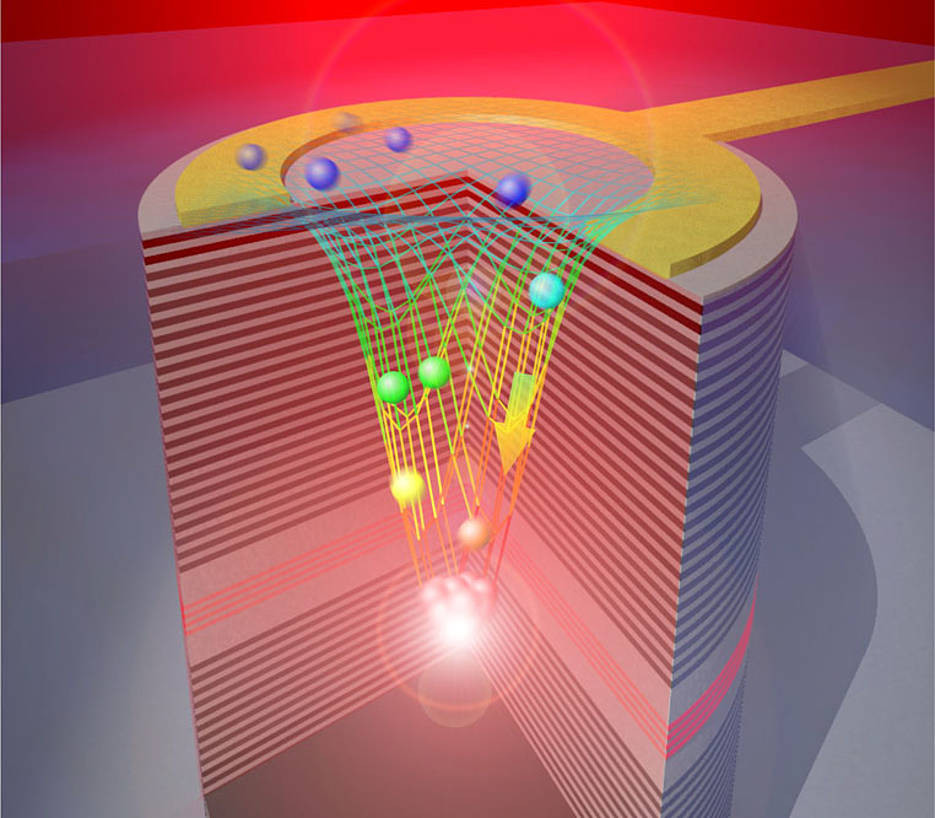 It also emits light the waves of which are in phase with one another: the polariton laser, developed and validated by University of Würzburg physicists at the Department of Applied Physics, who have worked for years on the respective experiments in close collaboration with an international research team. In this respect, it is similar to the conventional semiconductor laser, which is ubiquitous today in all sorts of places and devices – from the laboratory to the CD player in the living-room.

How a polariton laser works

However, the physical processes taking place in a polariton laser are fundamentally different. "In simplified terms, we send electrons and electron holes into a quantum well by applying an electric voltage. Due to their opposite charge, they are attracted to each other and form a so-called exciton together. The polaritons result from the strong light-matter coupling of these excitons in semiconductor microcavities. These decay after a short time, emitting photons in the process," says Sven Höfling, a research associate at the Department of Applied Physics, explaining the formation mechanism. He conducted the relevant experiments together with Christian Schneider and Arash Rahimi-Iman.

When excitons decay, photons are created. These are reflected by cavity mirrors in the direction of the quantum well. There, the photons can be absorbed again, in which process new excitons are produced. "Thus, there is a periodic energy exchange in the strong coupling regime and new quasiparticles, known as polaritons, are continuously produced" says Höfling.

Controllable characteristics of the polariton

"The mass of a polariton is extremely small, approximately as tiny as that of a photon in the microcavity," says Christian Schneider. Basically, a polariton possesses mixed characteristics of excitons and photons. With the setup of the experiment, the physicists can determine to which degree the respective characteristics are pronounced.

Of course, the confinement of the polaritons between the mirrors does not last forever. "We use mirrors with a finite reflectivity," Schneider explains. As a consequence, the polariton laser also emits coherent light – the laser beam. In this respect, the result can hardly be distinguished from that of a conventional laser, even though it is based on a completely different principle of operation. However, the polariton laser requires significantly less energy for this process; the energy consumption decreases by one to two orders of magnitude according to Schneider.

As early as in 2007, Sven Höfling had the idea of developing an electrically driven polariton laser; the study group started with the experiments in 2008. Working in collaboration with colleagues at Stanford University, they soon obtained their first results. At this point, the researchers were confronted with a fundamental problem: "It is extremely difficult to determine whether you have created a polariton laser or just a normal laser. The characteristics of the emitted light are generally quite indistinguishable," says Höfling. In order to establish clear proof of polariton laser operation, an international research team with partners from the USA, Japan, Russia, Singapore, Iceland and Germany supplemented the first experiments with another component. "Because matter is sensitive to magnetic fields, we have carried out our measurements anew, examining the sample in a magnetic field," Schneider explains. The result shows clearly that polaritons were actually present.

In order to work well, the Würzburg polariton laser needs very low temperatures of about 10 K – i.e. minus 263 degrees Celsius. The physicists would like to change this requirement. They intend to set the process going even at room temperature. This is interesting for another reason as well:  "The processes taking place in a polariton laser are closely related to those in a Bose-Einstein condensate," explains Christian Schneider.

Close to the Bose-Einstein condensate

The Bose-Einstein condensate: It is known by physicists as a form of matter with very peculiar characteristics. It can be induced if you cool atoms to temperatures very near zero kelvin, i.e. near absolute zero. In this state, the atoms give up their individual identity and they all behave like one single super atom.

For the moment, the scientists are pleased with what they have achieved so far: "Due to the electrical operation, our results represent a great step towards the practical application of polaritonic light sources," says Sven Höfling. Furthermore, he is confident that an electrically driven polariton laser that even works at room temperature will soon be fabricated with the help of suitable materials.