A flash of light as a learning aid

Special ion channels make it possible: Neurons can be activated and deactivated purposefully using light. Scientists from the University of Würzburg have now significantly improved these channels, making it easier than ever before to examine complex patterns of behavior. 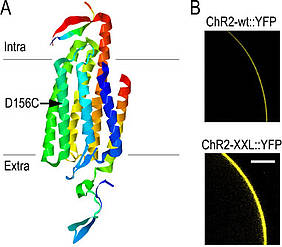 They are more than 10,000 times more effective than their naturally occurring variant: Light-sensitive ion channels developed and tested by Würzburg plant physiologist Professor Georg Nagel and physiologist Dr. Robert Kittel. They make it much easier than before to stimulate neurons, thereby reducing the effort required in a whole range of experiments. As a result, the scientists are opening up new paths in the study of complex brain functions; they present their work in Proceedings of the National Academy of Science (PNAS).

“With the help of ion channels, cells conduct electrically charged particles through their cell membrane into the cell interior or out into the extracellular space. Neurons use this mechanism, for example, to transmit signals from sensations to the brain and to control muscles,” says Georg Nagel to explain how these cellular constituents work. The research conducted by the two scientists is focused on very specific ion channels, known as channelrhodopsins. These react to light and can therefore be activated and deactivated again in a comparatively simple manner. Nagel is one of the pioneers in this field, which has become known as “optogenetics”.

For a better understanding of the brain

One research area in particular has benefited enormously from the development of channelrhodopsins: neuroscience. The targeted control of individual neurons and groups of neurons allows deep insights into complex brain functions; the technology provides researchers with a tool that they can use to examine the causal relationship between neuronal activity and behavior. “The development of light-sensitive ion channels, which are integrated purposefully into specific cells with the help of genetic engineering, has proven to be a unique solution for this challenge,” says Robert Kittel. Kittel, who is in charge of an Emmy Noether research group at the University of Würzburg’s Institute of Physiology, knows what he is talking about. Together with his team, he is studying the fruit fly Drosophila melanogaster to learn about the molecular mechanisms in neurons and their relationship with certain behaviors. Kittel also relies here on light-sensitive ion channels.

Until now, however, scientists had a serious problem when conducting their experiments: “In order to be able to study the behavior of fruit flies, the insects have to be able to move around as undisturbed and as freely as possible,” says Kittel. But, at the same time, the researchers have to be in a position to activate the channelrhodopsins in the neurons with light pulses. With fly larvae this is still comparatively easy since their bodies are virtually transparent. It is more difficult with mature insects; in adults the pigmented integument significantly reduces the incidence of light. It used to take considerable effort on the part of the scientists to offset this disadvantage in their experiments, and still they would not be able to overcome every single problem. “In order to activate the channelrhodopsins in these cases, we have to use high-energy light,” says Kittel. If this is done over a relatively long period of time, the heat generated can harm the flies.

The performance of the new ion channels developed by Nagel have been put to the test by Kittel and his colleagues in a series of experiments on fruit flies – including an examination of a complex behavior, the courtship ritual. “In the wild, male fruit flies demonstrate a characteristic pattern of behavior during courtship that is made up of a fixed sequence of different activities,” explains Robert Kittel. As part of this, the males first “tap” the female on the abdomen and then encircle or follow her. Meanwhile, they extend a wing and start to vibrate it, producing a very special “love song”. This behavior is stimulated by a network of around 2,000 neurons.

Do male flies exhibit this behavior even when the neuronal network, loaded with the newly developed ion channels, is activated by comparatively weak light pulses? Yes, proves the Würzburg study – though with changes in the sequence. “Our tests suggest that the biophysical properties of these ion channels reverse the temporal sequence of the individual elements of the courtship ritual,” say the researchers. Nagel and Kittel presume that responsibility for this lies with the fact that the corresponding neurons are activated very quickly by the light pulse, and this takes a while to end.

Learning at the touch of a switch

Whether higher neuronal functions can also be researched in experiments with the help of the new ion channels has been examined by the scientists in a classical learning situation in collaboration with Professor André Fiala from the University of Göttingen. Fruit flies, for example, can be trained to recognize and distinguish between different smells. The traditional method for doing this is to present the insects with one scent together with a reward and another scent in combination with a punishment. After a series of repetitions, the insects have learned to avoid one of the scents and to seek out the other.

Fiala achieved the same result in his experiments. However, he did not use an actual reward or punishment. Instead, when presenting one scent he used short flashes of light to activate specific cells in the nervous system of the fruit flies, known as dopaminergic neurons. “These modulating neurons activate the ‘punishment information’ in the process of associative learning,” explains Fiala. In so doing, they ensure that the flies learn to keep away from this smell. The success rate in this learning process was just as high as in comparable experiments in which the flies experienced a real punishment.

All in all, the scientists agree that the new channelrhodopsin is particularly suited to experiments desiring maximum light sensitivity – such as when cells are difficult to trigger by optical means or there is a risk of harm from heat. Therefore, the ion channel is especially suitable for experiments in which the quantity of light is the limiting factor, such as tests on animals that move around freely in the space. Kittel and Nagel are convinced that the properties of this “powerful optogenetic tool” are of interest not only to the entire Drosophila community, but also to all biologists who want to research the behavior of freely moving animals.