Lasers are ubiquitous. Scientists from Würzburg have now developed the virtual-reality laser laboratory “femtoPro”, which simulates optical setups in real time and enables eye-safe training in the handling of short-pulse lasers. 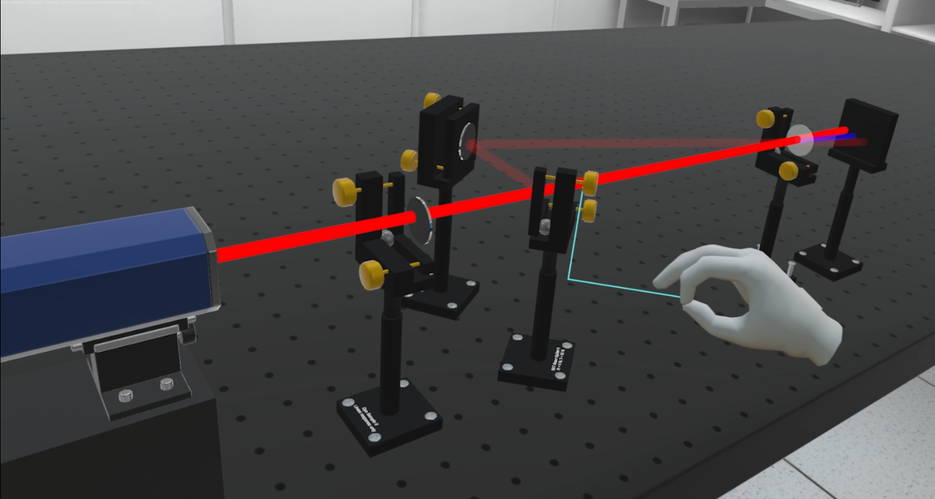 View into virtual lab. This image is part of a two-minute movie available at https://go.uniwue.de/femtopro. (Photo: Stefan Müller / Universität Würzburg)

In everyday life, we know lasers from numerous applications such as the laser printer or the supermarket scanner. Industrially, lasers are used in material processing for cutting, drilling and labeling, and in medicine for diagnostic and therapeutic procedures. Laser spectroscopy methods are also indispensable in scientific research.

Theoretical education in optics is established at schools, universities and industrial sites. However, it is challenging to teach and learn the setup and proper handling of optical experiments. Due to high costs, equipment and teaching staff are usually limited. In addition, laser radiation is dangerous, so strict eye safety protocols must be followed.

Now, scientists at the Julius-Maximilians-University (JMU) of Würzburg have developed the novel virtual-reality (VR) laser laboratory “femtoPro”. In femtoPro, users wear VR goggles and manipulate optical elements on a VR laser table. In this way, the coarse and fine positioning of mirrors, lenses, iris apertures or other devices can be changed intuitively and with the same attention to detail as in the real laboratory. The properties and effects of these elements on the laser beam are calculated and displayed in real time according to physical laws.

“Flight simulators have become indispensable for the realistic practical training of pilots. We have now applied this concept to short-pulse lasers for the first time worldwide,” explains Professor Tobias Brixner, one of the femtoPro developers and head of the Chair of Physical Chemistry I at the JMU, whose research focuses on ultrashort laser pulses.

The difficulty with the VR approach is that, contrary to popular belief, laser beams are not just “line-shaped,” but have a “Gaussian” cross-section whose diameter can grow larger and smaller as they propagate. Moreover, the interaction with matter is highly complex and includes widely known phenomena such as refraction of light on a glass, as well as nonlinear optics leading to frequency conversion (i.e., color change). As a result, accurate simulation is usually very time-consuming.

“In order to realize an interactive learning lab for such optical systems in VR, we had to accelerate the necessary calculations so that they run in real time on a commercially available consumer VR platform,” explains cooperation partner Professor Sebastian von Mammen, head of the Games Engineering group at the Computer Science Chair for Human-Computer Interaction at JMU. As a result, the acquisition costs of the virtual lab amount to only a few hundred euros, while a real short-pulse laser lab would require an investment of hundreds of thousands of euros.

After two years of development work, the first version of femtoPro will now be presented to the public for the first time at the “Highlights der Physik” event in Würzburg. As part of a large hands-on exhibition at the marketplace from September 28 to October 2, 2021, interested parties can put on VR goggles themselves at booth B2 ("May the Force be with you! - Lightsaber and Laser Pulses") and experiment with lasers in the virtual laboratory.

Viable digitization in teaching and training is an important contemporary issue, as has been made particularly clear by the Covid-19 restrictions at schools and universities. The Fonds der Chemischen Industrie e.V. (FCI) has announced that it will therefore provide financial support for the femtoPro project. FCI Managing Director Gerd Romanowski says with regard to the transformation resulting from digitalization: “With a view to these profound changes, our support for new teaching content and methods is intended to broaden the competencies and qualifications of young people.”

In the future, femtoPro will not only be used for teaching in Würzburg, but will also be available to other universities or schools.