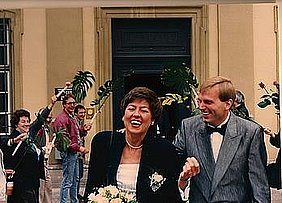 Professors Barbara Demmig-Adams and William Adams were married in the Rathaus in Würzburg 25 years ago. Today they are both faculty members in the Department of Ecology & Evolutionary Biology at the University of Colorado at Boulder.  They have had a long and productive relationship, both professionally and personally.  Barbara was elected to Leopoldina, the National Academy of Sciences of Germany, Austria, & Switzerland, in May 2011.

Prof. Demmig-Adams, you and your husband both studied at the University of Würzburg, but you said you met at Stanford University. How did you come to meet there?

I studied at the Universität Würzburg, first completing my Staatsexamen in Biology and Chemistry (1979) followed by a doctorate in plant physiology from the Lehrstuhl für Botanik I (1984).  I then went to the Department of Plant Biology of the Carnegie Institution of Washington in Palo Alto, California for a two-year postdoctoral appointment.

Shortly after my arrival, William visited the laboratory of my mentor Prof. Olle Björkman, where the two of us met for the first time.  William had just begun working on his PhD under the mentorship of Prof. Barry Osmond at the Desert Research Institute in Reno, Nevada, and Prof. Osmond thought that William could benefit from seeing how some experiments were being conducted in Prof. Björkman’s laboratory.

William returned to Prof. Björkman’s laboratory to conduct some measurements a year later during the summer of 1985, and discovered that we would both be attending a scientific conference in Honolulu on the island of Oahu, Hawaii in September.  Neither of us had been to Hawaii before, so we decided to stay a couple of days after the conference to explore the neighboring island of Kauai.  Following our return, William invited me to go on a field trip to the desert in Death Valley, where he was conducting research on a cactus (a trip on which Prof. Osmond suffered from heatstroke, even though it was the beginning of October!).

We saw each other every two or three weeks for the next several months until William departed for Australia to complete his research and obtain his PhD from the Australian National University.  I returned to Würzburg in March of 1986, where I conducted research in the Lehrstuhl für Botanik II toward my Habilitation in plant biology. William managed to attend a conference in Hamburg in 1986, and I was invited to participate in a conference in Canberra in 1987, after which William took me to his three Australian field sites.

William was fortunate to obtain a yearlong NATO Postdoctoral Fellowship, followed by a fellowship from the Alexander von Humboldt Stiftung that supported his research at the Lehtstuhl für Botanik II.  It was during this time that our professional collaboration really began to flourish, and the personal relationship blossomed, leading to our marriage in May of 1988.

Thank you very much for this interview!