They did not get a culture shock; the only thing giving them a hard time is the weather. Six Indian scholarship holders are currently on a two-month visit to the University of Würzburg. They are the first Indian students to undertake the journey to the West under the "New Passage to India" program. 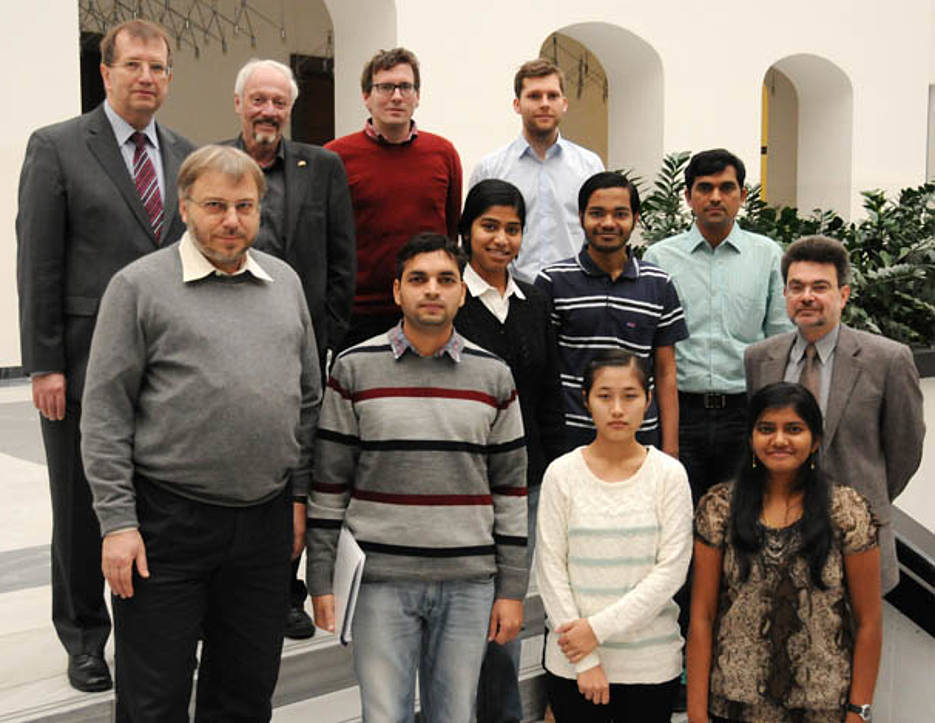 Ngaimuanching has been studying German for four years at Jawaharlal Nehru University in New Delhi. At the end of December, she arrived on German soil for the first time in her life. Since then, the master's degree student has been busy collecting literature as part of her thesis research at the University of Würzburg under the tutelage of literary scholar Professor Roland Borgards. "In India, it is virtually impossible to lay your hands on German books," she says. Therefore, she spends a great deal of her time in the university library, searching for literature on the holocaust – reading, copying or scanning the relevant books page by page.

When asked how she likes Würzburg, she answers "very much!", even though she found that she didn't choose the best time for her visit to Germany. "There are no longer any lectures or seminars open for me to enroll in.  Furthermore, all the other students are busy studying for upcoming tests," she adds. This makes it somewhat difficult to forge personal relationships and meet new people. However, the people she has met so far are all "very nice" as she even says twice. Since she likes Würzburg so much, she is planning to extend her stay until June or July if possible.

The "New Passage to India" program

In the recent weeks, six master's degree students and doctoral students from India have been staying at the University of Würzburg, making new contacts, collecting academic material and working in the laboratory for their respective research projects. They were the first batch of students to visit Würzburg under the scholarship program of the German Academic Exchange Service (DAAD). In the reverse direction, this international exchange has been successfully conducted for quite some time.

"We started the program at the end of the year 2010. Since then, more than 40 scholarship holders from the University of Würzburg have visited India for research stays of mostly several months' duration," says Dr. Stephan Schröder-Köhne, head of the University of Würzburg Graduate Schools, who is in charge of program organization. "This is intended in particular to encourage joint research projects."

Initially, the master's degree students and doctoral students applying for the DAAD scholarship came mainly from the Indology Department, but now the students interested in this program are spread across almost all faculties as Schröder-Köhne explains. Even a musicologist recently took advantage of the program to conduct field studies in Rishi Valley.

The "New Passage to India" scholarship includes travel expenses, health insurance and a monthly grant of about 1000 euros. The German Academic Exchange Service (DAAD) provides this funding with the intention to expand the cultural knowledge about India at German universities and to intensify the academic exchange with India. Another objective is to establish close long-term relations between the two countries and to initiate joint projects. The mobility program supplements the "Center for Modern India" at the University of Würzburg, with which it is closely coordinated. The latter is one of only three such institutions in Germany and it is also funded by the DAAD. The Federal Ministry of Education and Research supports both areas of funding.

As is reflected in its list of partnerships, the university of Würzburg is well aware of the increasing significance of India, having signed partnership agreements with altogether eight Indian universities and research institutions. It can count among its partners two of India's most important "Central Universities", JNU New Delhi and the University of Hyderabad. Moreover, three leading research institutes in Bangalore joined as partners in 2012: the Indian Institute of Science and two Tata Institutes of Fundamental Research, which are comparable to institutes of the Max Plank Society in Germany, namely the National Center for Biological Sciences in Bangalore and the Center for Applicable Mathematics.

Alfred Forchel's address to his guests

"The importance of international contacts and of the exchange between people cannot be overestimated," said University President Alfred Forchel at a reception for the guests in the Senate Room of the University. Globalization – today primarily used as a buzzword in an economic context – has long been a reality in science. This shouldn't be surprising, "as scientific discoveries are generally of universal significance," Forchel continued.

The president of the university encouraged his guests from India to come forward with any problems they might have encountered during their stay in Würzburg. After all, you are pioneers and "there is no easy way for pioneers," Forchel noted. However, he did not receive any complaints except for some moaning about the uncomfortably cold winter – which can be considered rather mild by the standards of Würzburg winters.

The visitors from India included (the names of their tutors are given in brackets):